by Gazette Staff
in Skyward, Sports
0 0
0 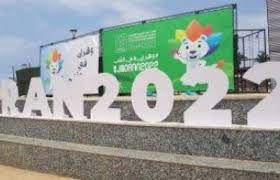 EgyptAir on Thursday transported Egyptian mission participating in the 2022 Mediterranean Games in the Algerian city of Oran.

It added the organisation of this flight emanates from the societal responsibility EgyptAir shoulders in the sports field, in addition to Egypt’s representation in international sports events.

Egypt is taking part in the 19th edition of the Mediterranean Games in Oran on June 25 to July 5, according to it.