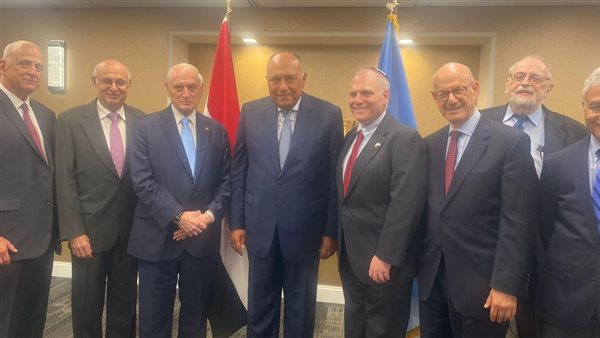 New York- Egyptian Foreign Minister Sameh Shoukry stressed the necessity of breaking the current deadlock in the Middle East peace process via resuming negotiations between the Palestinian and Israeli sides as soon as possible, with the view to achieving a two-state solution.

This came during a meeting between Shoukry and representatives of American Jewish Organizations on the sidelines of the 77th session of the General Assembly in New York.

In statements, Spokesman for the Foreign Ministry Ambassador Ahmed Abou Zeid said that Shoukry, reviewed Egypt’s efforts and its crucial role in bringing an end to the recent escalation in the Gaza Strip and upholding the truce to prevent the renewal of violence and deterioration of the situation.

The two sides underlined that the current year; they marked the centenary of the establishment of diplomatic ties between Egypt and the United States.

They also stressed the historical partnership between the two countries based on co-operation and mutual interest, underlining the importance of promoting bilateral ties the political, economic and cultural domains.

The meeting also took up the latest development at the regional and international levels, as well as international challenges; topped by climate change and the food and energy crises.

They stressed the importance of continuing coordination between Egypt and US to overcome the challenges facing the region.

They also discussed the latest developments related to the peace process.