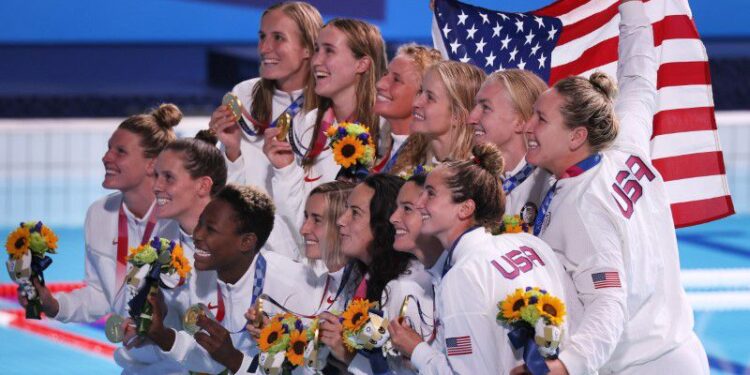 United States' team members pose with their national flag as they celebrate winning gold on Saturday.

TOKYO – The United States women’s water polo team won a third consecutive Olympic gold medal on Saturday, overcoming a string of setbacks on the road to Tokyo to extend their dominance in the sport.

The team crushed Spain 14-5 in the final to take gold. The U.S. women have finished on the podium at every Games since women’s water polo was added to the Olympic programme in 2000.

“There’s going be a lot of talk about the three gold medals,” coach Adam Krikorian said according to Reuters. “The reality is, this was the very first gold medal for this team.”

Continuity came from players such as captain Maggie Steffens, 28, who broke the all-time Olympic scoring record during the Games — while playing with a broken nose.

Athletes have been impacted by the COVID-19 pandemic, which forced a year’s delay to the Games and the US women’s squad have also suffered other misfortunes.

In 2019, team member Kaleigh Gilchrist was injured in an accident in South Korea when the balcony of a nightclub collapsed.

“I didn’t know I was going to make this roster and coming back from injury and losing mentors and dealing with panic and PTSD, it was a lot,” said Gilchrist.

“This extra year might have helped me grow and be able to compete the way I wanted to win these Games,” she said.

The physical and mental strain the Olympics places on athletes has been widely discussed in Tokyo. The players in water polo, one of the toughest sports, say they lean on team mates for support.

“Throughout all of the adversity that we faced we felt strong together and I’m glad that we showed up in this moment together,” said goalkeeper Ashleigh Johnson.