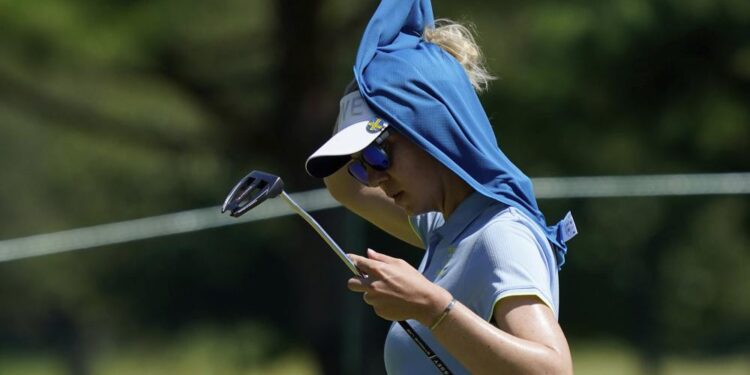 KAWAGOE, Japan — Lexi Thompson had to bring in a team manager the last three holes when her caddie succumbed to the heat. Players walked down sunbaked fairways using umbrellas, some of them occasionally holding a bag of ice on their heads, AP reported.

Madelene Sagstrom had a hot start of her own Wednesday in women’s golf.

With a tough pitch to 4 feet for par on the final hole, the Swede kept bogeys off her card on a day of searing heat for a 5-under 66, giving her a one-shot lead over top-ranked Nelly Korda of the United States and Aditi Ashok of India.

Extreme heat is nothing new for most of the top players, with an LPGA Tour schedule that includes stops in Singapore and Thailand. This ranked right up there. The heat index topped 100 degrees Fahrenheit (37.8 Celsius), and at that point caddies were allowed to remove their bibs.

Heat wasn’t the only problem. A tropical storm is approaching, and the current forecast is for a 70% chance of heavy rain on Saturday, a slighter higher chance on Sunday. The competition must finish by Sunday when the Olympics close.

Heather Daly-Donofrio, an International Golf Federation technical delegate in charge of the women’s competition, said players have been informed about the possibility of a 54-hole event.

That depends on the weather, and a decision likely won’t be made until after the second round at the earliest. The extreme heat ruled out any thought of playing 27 holes apiece over the next two days because of player health.

“It’s hot, I’m not going to lie. It’s very hot,” Sagstrom said. “But it’s manageable. Most of us have been in Asia, played a lot of golf over here, so we know what to do. You drink a lot of water, you have cooling towels, umbrella, just maintaining the energy and not go crazy. I think at this point it’s harder for the caddies than it is for the players.”

No need to explain that to Thompson. She was walking up the 15th fairway when she said her caddie, Jack Fulghum, turned to her and said, “Do I look white to you?”

“I didn’t really notice. But he just didn’t look good,” Thompson said. “I just want him to be healthy, that’s all.”

She had him sit down off the green and brought in Donna Wilkins, who works in player services for the LPGA Tour and is on the staff for Team USA at the Olympics. Thompson birdied three straight holes, closed with a bogey and shot 72.

Sagstrom managed just fine, opening with a 4-foot birdie, using her power to set up a two-putt birdie on the par-5 fifth and navigating a Kasumigaseki course that was drier and faster than it was for the men last week.

Korda, who reached No. 1 in the world by winning her first major six weeks ago at the Women’s PGA Championship, overcame a pair of early bogeys with enough birdies to not fall behind, and she eventually worked her way up the leaderboard with a 67.