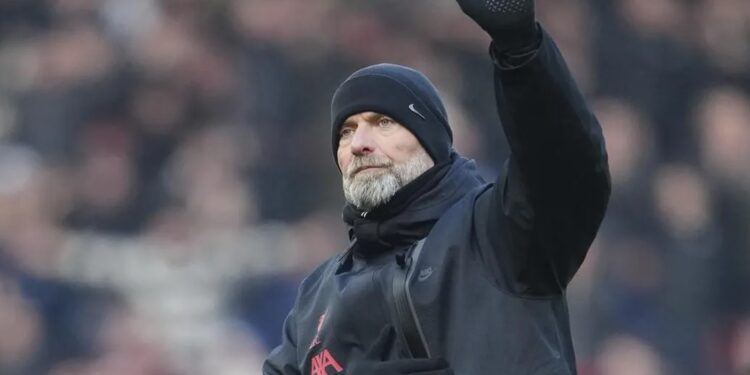 MANCHESTER, England  — Jurgen Klopp said a 0-0 draw with Chelsea is a step in the right direction for Liverpool despite the point doing little for their chances of catching the top four.

Despite reaching 1,000 games in management, Klopp must feel like he is at the beginning of a new journey at Liverpool.

An uninspiring draw with Chelsea in the English Premier League was in stark contrast to the glorious performances his teams have produced during his trophy-laden time at Anfield.

His 250th game in charge of Liverpool laid bare the challenge he faces to get his struggling team back in contention for the biggest prizes.

It was only last year that the Merseyside club mounted a stirring bid for an unprecedented quadruple of trophies.

Now Liverpool sits eighth in the league – Chelsea is 10th – and belongs there after three games without a win. Liverpool is in a fight just to secure a place in the top four and next season´s Champions League.

“For me, it is clear, in this situation you have to be ready for little steps . . . and this was a little step today, that´s how it is. I expect progress and I think from the last league game (a 3-0 loss against Brighton) it was progress, definitely, and that´s important.”

There are several factors behind Liverpool´s sudden decline.

The impact of Sadio Mane´s move to Bayern Munich has been significant – and compounded by a host of injuries up front, with Luis Diaz, Diogo Jota and Roberto Firmino all out.

Mane´s replacement, Darwin Nunez, has been inconsistent in his first season in English soccer and January signing Cody Gakpo will also need time to adapt.

Virgil van Dijk is another high-profile injury absentee, while Klopp´s aging midfield looks in need of an overhaul, with England´s Jude Bellingham widely regarded as a dream recruit.

This is a season of transition, with the FA Cup and Champions League remaining as Liverpool´s best chances of silverware after being overtaken by Manchester United and Newcastle in the league. Those teams look capable of finishing in the top four and maybe more.

On as a 55th-minute substitute, new Chelsea signing Mykhailo Mudryk injected quality into a game that looked desperately short of match-winners.

The winger´s move from Shakhtar Donetsk could be worth up to $108 million but there was little sign of that price tag weighing him down as he sparked panic in Liverpool´s defense with his dribbling and burst of pace.

“He´s had two sessions with us, but from watching him at Shakhtar, seeing his quality there, he is dangerous in one vs. one situations,” Chelsea manager Graham Potter said. “In the final third he can make things happen. He´ll get supporters off their seats,”

It just gets worse for Frank Lampard after Everton lost to West Ham 2-0 in front of the Merseyside club chairman Bill Kenwright and majority shareholder Farhad Moshiri.

That´s eight losses in a winless run that stretches to 10 games in all competitions.

Kenwright was asked as he left London Stadium if the latest defeat spelled the end for Lampard.

“It´s been a bad run of results for us all, and for Frank, but I would never say that to you. We´ve just got to start winning, haven´t we?” he said.

It is becoming increasingly difficult to see where Everton´s next win will come from and whether Lampard can turn his team´s fortunes around.

The nature of the loss against a West Ham team that was also in desperate need of the points, deepened the doubts about Lampard´s position.

West Ham had managed just one win in its previous eight games before Saturday, but Jarrod Bowen´s first-half double lifted it out of the bottom three.

No one has been cut adrift in the fight for survival with just three points separating Leicester in 14th and bottom-of-the-table Southampton.

Leicester was denied a first win in the league since November when substitute Evan Ferguson struck in the 88th minute to earn visiting Brighton a 2-2 draw.

Nottingham Forest´s upwards trajectory continued after Sam Surridge´s 83rd-minute equalizer in a 1-1 draw at Bournemouth which dropped the Cherries into the bottom three.

Forest has picked up 11 points from a possible 18 to move five points away from the drop zone.

Villa’s rise under manager Unai Emery extended to five wins in the Spaniard´s seven league games in charge, with only one defeat.

Villa was a place above the relegation zone on goal difference when Steven Gerrard was fired in October, but is up to 11th and one point behind Liverpool and Chelsea.

“We can do better,” Emery said. “We are winning some matches, but there´s more in my mind I want to do.”