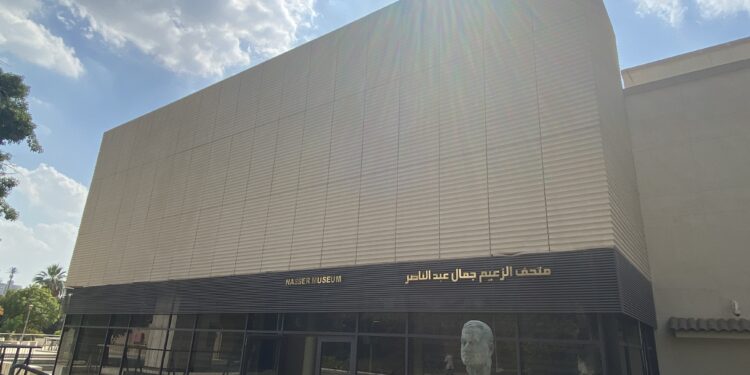 In the 1950s, Egypt toppled the monarchy and started a new era in which it became a republic. President Gamal Abdel Nasser took over in June 1956 amid a difficult time in Egyptian history. To live this period as if you were witnessing its events can be only felt inside his house, where he lived and managed state affairs. 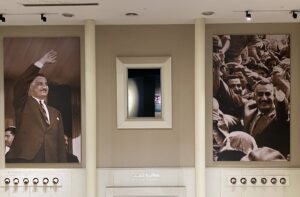 Huge banners of him are fixed on the four walls of the lobby in which he is gesturing or giving a speech in front of millions, welcoming the visitors in this house-turned-museum.

Simplicity is the first impression visitors may feel inside. No lavish furniture like that of Ottoman-style palaces of the former rulers.

His wife, Tahia Kazem, lived in the house until her death in 1992 then it was given to the nation to be turned into a museum celebrating the leader.

Soha Ahmed, director of the museum, told the Egyptian Mail, that turning the house into a museum needed changing the decoration of the house. The lobby of the house for example had no ceiling and there was a fountain in the middle. Now it is covered and the fountain removed. His children’s bedrooms now house the personal belongings of Nasser.

The ground floor has three halls, each bearing a name. The first on the right is called Mansheyet Al-Bakri, named after the area in which the house is located. It contains the presidential salon, where Nasser used to meet presidents and kings. There is another room where Tahia received the leaders’ wives. Then there is his office room in which he managed government affairs and held meetings with ministers.

The hall on the left is called the Museum Gallery, containing dozens of medals and orders of merit he obtained from Arab and foreign leaders.

There is a collection of cameras, filming equipment, binoculars and tripods reflecting how Nasser loved photography. On the wall there are many photos he took on different family occasions.

On the upper floor, visitors see many showcases displaying his personal belongings. Here are vinyl records of works by Sammartini, Floroni, Sarti, Bach, Tchaikovsky, and Mozart, and one of Umm Kulthum’s song El-Hob Keda (Love’s like that). 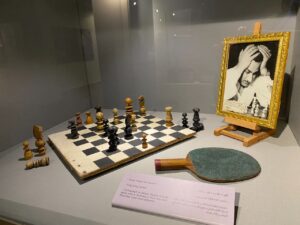 A medical scale, a Philips triple-head electric shaver, an Optima Arabic typewriter made in East Germany, a photo of him in deep thought during a chess game. (In front of the photo are his chess board and pawns and his ping pong paddle), such are the many items that give us a glimpse into the life of this illustrious man.

A collection of his neckties of different colours and patterns in addition to shoes and boots are on display along with a collection of shirts including a Fred Perry Tennis shirt.

On display also are his and Tahia golden wedding rings, each ring has the partner name engraved inside in Arabic and the date of their first meeting, 14 January 1944.

The biggest hall in the museum is called Story of a Nation. It is preceded by a corridor on its two walls are big photos of millions of people attending his different speeches.

While walking through this corridor which prepares you to enter a different hall, you hear his melodious and enthusiastic voice announcing the nationalisation of the Suez Canal, then you enter the hall to find screens and huge banners telling of political life during his rule.

These events include Egypt Evacuation Day, when foreign troops left the country, and the declaration of full independence from the British on 18 June 1956, the Tripartite Aggression and the building of the Aswan High Dam.

The Nasser era was a time when nations looked to a national hero to unite with and whom he can represent in foreign affairs.
A collection of photos showing Nasser and the presidents and kings of that era, dominates the hall.

This is the era where the national independence movements in Third World countries appeared, led by their national symbols like Nehru, Sukarno, Nkrumah, Ben Bella and Lumumba, all of whom have worked hard during the pressures of the Cold War.

Throughout his presidency, Nasser was concerned about the establishment of balanced foreign relations with the countries seeking to be independent from colonial sovereignty.

Accordingly, he worked on stabilising the relations between the Arab countries as well as played a major role to promote the Egyptian-African relations during the late 1950s and early 1960s. His era witnessed the development of foreign and military relations between Egypt and the Soviet Union.

After touring this hall with its memories of wars and joyous and sad events, visitors can enter his bedroom, the last place he was in before his death.

On September 28, 1970, hours after Nasser attended the Arab league summit, he suffered a heart attack. Immediately he was brought to this house and he died hours later on this bed.

Nasser’s museum is located at 1 Manshiet Al Tairan St, Mansheyet Al-Bakri, behind the Heliopolis Club. It is open daily, except Friday and Monday, from 10am to 3pm. Tickets cost LE10 for Egyptians and LE20 for foreigners.