by Sahar Elzayaty
in Egypt, Sports
1 0
0 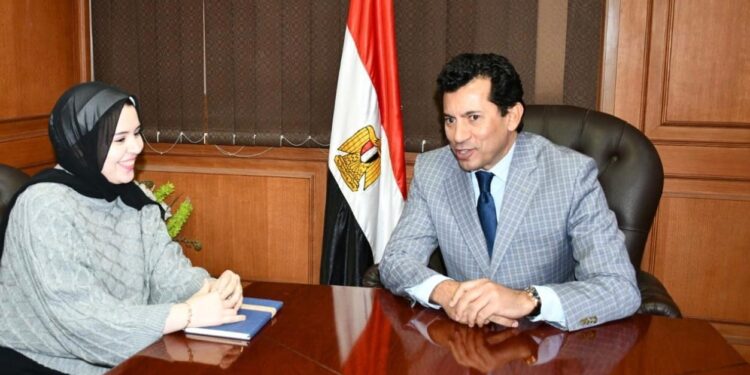 When it broke out before and after 2020, Covid-19 made it difficult for many countries to host sports events.

The current war in Ukraine only made things worse for international sports.

Apart from causing problems to sports, the war also opened the door for economic turmoil around the world.

Nonetheless, with good planning and vision, the Egyptian Ministry of Youth and Sports succeeded in overcoming the challenges induced by the pandemic and the war.

The ministry managed to make Egypt an inspiring venue for 280 continental and international sports events, just when the world was reeling under the effects of the pandemic and the war in Ukraine.

This success boils down to a number of factors, most important of which is unrelenting support by President Abdel Fattah El Sisi, Minister of Youth and Sports, Ashraf Sobhi, said. 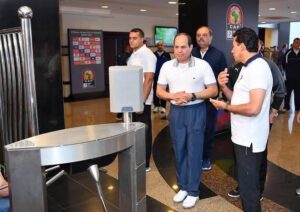 “The president makes a constant follow-up of the work of our ministry,” he told the Egyptian Mail in an interview.

This interest at the highest political level, he said, turned Egypt into a main destination for major international sports events and competitions.

The minister noted that Egypt has become ready to host all sports events.

“Our country is ready to fulfil all the requirements of international sports federations,” the minister said.

He referred to Egypt’s modern sports infrastructure which includes – among many other things – leading-edge football stadiums and indoor stadiums in different Egyptian cities.

Minister Sobhi revealed that his ministry would start preparing the file for hosting the 2036 Olympics.

“We are also preparing a file to host the FIFA World Cup in 2030 or 2034,” the minister said. “We will work very hard on these files to make it happen.” 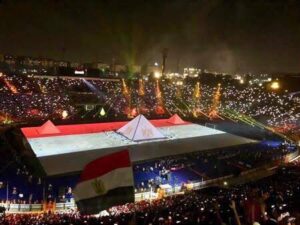 The Ministry of Youth and Sports announced in September of last year that President Sisi had approved a potential Egyptian bid to host the 2036 Olympic Games.

Bach commended Egypt’s sports infrastructure, noting that the 2036 Olympic Games would be a historic event for Egypt, if they are organised in the Arab country.

All countries, Minister Sobhi said, praise Egypt’s capabilities, especially thanks to the impressive organisation of the 2019 African Cup of Nations and Africa U-23 Cup of Nations.

Apart from these two successful events, Egypt also hosted the World Handball Championship in 2020, where 32 countries participated, for the first time in the history of the tournament.

To protect tournament participants against Covid-19, Egypt introduced what came to be known as the ‘medical bubble’, a closed circle that offered people the space required to prevent the transmission of contagion to them.

The medical bubble idea was then adopted by other countries that organised sports events later. 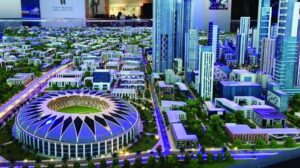 Minister Sobhi revealed that the construction of the Egyptian International Olympic Games City is almost complete.

President Sisi, he added, gave commands for operating the city in accordance with the latest international standards.

The minister noted that his ministry would co-operate with specialised international companies to put the presidential directives in this regard into effect.

Observers believe the city will move Egyptian sports to a new stage and put it on equal footing with countries that enjoy an avant-garde sports infrastructure.

“The completion of the city will make Egypt qualified to host the Olympic Games,” Minister Sobhi said.

“The city will make Egypt a unique model in Africa and the Middle East,” he added. 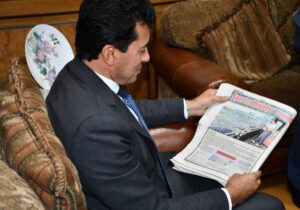 Minister Sobhi said his ministry spares no effort to provide local sports federations with their needs.

The ministry, he said, also works hard to help Egyptian athletes participate in all international championships and competitions.

The minister referred to the importance his ministry attaches to preparations for the 2024 Paris Olympic Games.

These preparations, he said, include support and sponsorship of Egyptian teams and champions to prod them into winning Olympic medals commensurate with the size and stature of the Egyptian state and its continental and global leadership in various sports fields.

The Ministry of Youth and Sports made great efforts to raise awareness about climate change, and support national efforts in this regard, being a key partner in Egypt’s latest hosting of the 27th United Nations Climate Change Conference, widely known as COP27, in Sharm el-Sheikh.

Minister Sobhi said his ministry organised close to 30 events across Egypt to raise awareness about environmental issues and climate change.

The ministry, he said, launched several initiatives, including the Youth and Climate Convoy initiative which aimed to involve young people in addressing climate change issues.

The Ministry of Youth and Sports launched this initiative in cooperation with the Ministry of Environment, and in partnership with UNICEF and the United Nations Office in Egypt.

Minister Sobhi noted that local youth have the largest share of support and care from President Sisi since he came to power in mid-2014.

The president, he said, always places youth at the forefront of his priorities.

“This is why youth issues and needs always top the national agenda of action,” the minister said.

He added that youth have also become a priority target of comprehensive development programmes in Egypt, thanks to this presidential interest.

Minister Sobhi believes that sports can be a main driver of sustainable development and the achievement of the Egypt 2030 Vision.

“The sports economy achieved a lot in the past few years, becoming an important contributor to the GDP of nations,” the minister said.

He added that sports also support many sectors of the economy.

“It should be noted that we would not have had the current sports infrastructure without the comprehensive renaissance our country is witnessing,” Minister Sobhi said.

“Egypt’s success to complete trendsetting roads; transport systems; health and tourist facilities, and archaeological sites – among other things – is making it one of the most important sports centres in the region, the continent and the world,” he added.

Minister Sobhi said his ministry works to provide all types of support to the national handball team, closely co-operating with the Egyptian Handball Federation in this regard.

“We want our fans to rejoice at the victories and the performance of the players of the team,” the minister said.

The Egyptian handball team participates now at the IHF World Championship in Sweden and Poland.

Minister Sobhi expressed confidence in the players, their technical staff and the handball system in Egypt as a whole.