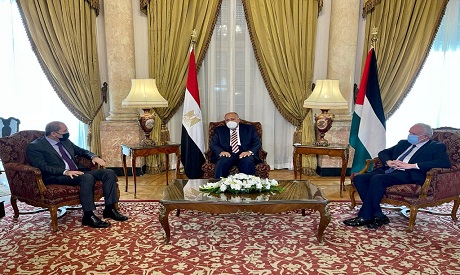 The foreign ministers of Egypt, Jordan and Palestine held a tripartite consultative meeting Wednesday to discuss the Palestinian cause and ways to resume negotiations and establish an independent Palestinian state.

Foreign Minister Sameh Shoukry, his Jordanian and Palestinian counterparts Ayman Safadi and Riyad Al-Maliki agreed to press on with efforts to create the “opportune” environment to revive the Israeli-Palestinian peace process with the aim of ending the current stalemate and reaching a comprehensive peace that would guarantee the establishment of an independent and viable Palestine state on the borders of June 1967, with East Jerusalem as its capital.” They also called for “effective” engagement by the international parties in the peace process.

The ministers stressed that the necessity to build on the momentum achieved in the recent period to make headway in the peace process on several tracks, he added.

Hafez added that the foreign ministers praised the outcomes of February’s emergency meeting, held by the Arab League in Cairo, where the Arab foreign ministers reaffirmed that the establishment of an “independent and sovereign” Palestinian state will remain the Arab world’s “central and fair” cause

The ministers also asserted the need to stop all the Israeli settlement activities in the occupied Palestinian territories.

“The settlement activities undermine the chances of reaching a two-state solution; moreover, they represent a violation of international legitimacy and international law resolutions,” the ministers stressed.

He also voiced hope that the upcoming elections would be a step towards ending intra-Palestinian division.

Hafez noted that the ministers agreed at the end of the meeting to continue coordination and consultations during the coming period to achieve common interests and work to revive the peace process in the Middle East.