US aircraft carrier arrives in S.Korea for joint drills 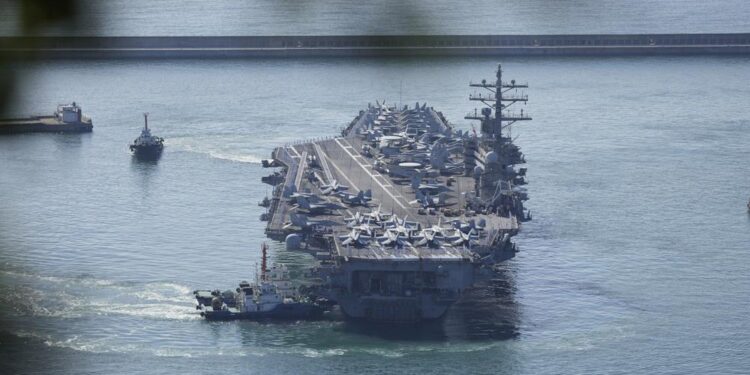 Busan – The nuclear-powered aircraft carrier USS Ronald Reagan arrived in the South Korean port of Busan ahead of the two countries’ joint military exercise that aims to show their strength against growing North Korean threats.

The joint drills will be the first involving a US aircraft carrier in the region since 2017, when the US sent three aircraft carriers including the Reagan for naval drills with South Korea in response to North Korean nuclear and missile tests.

The allies this year have revived their large-scale military drills that were downsized or shelved in previous years to support diplomacy with Pyongyang or because of COVID-19, responding to North Korea’s resumption of major weapons testing and increasing threats of nuclear conflicts with Seoul and Washington.

The South Korean navy said the training is meant to boost the allies’ military readiness and show “the firm resolve by the Korea-US alliance for the sake of peace and stability on the Korean Peninsula.”

“The commitment of the US carrier strike group operating in and around the peninsula illustrates our commitment to stand together and our desire and focus ensuring that we are interoperable and integrated to face any challenge or threat whenever we are required,” Rear Adm. Michael Donnelly, commander of the carrier strike group, said in a news conference.