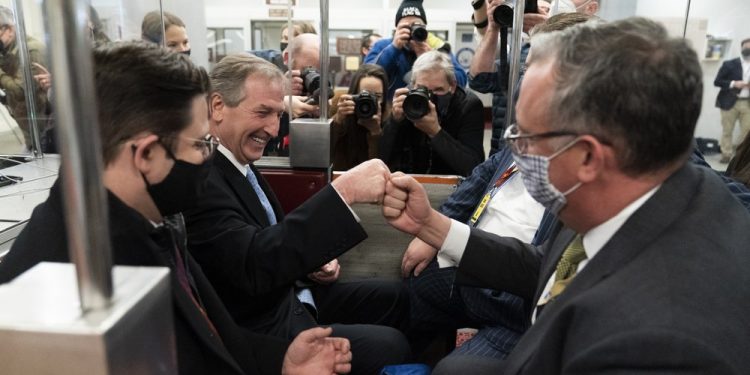 Michael van der Veen, second from left an attorney for former President Donald Trump, fist bumps a colleague as the depart on the Senate Subway, on Capitol Hill after the Senate acquitted Trump in his second impeachment trial in the Senate at the U.S. Capitol in Washington, Saturday, Feb. 13, 2021. Trump was accused of inciting the Jan. 6 attack on the U.S. Capitol, and the acquittal gives him a historic second victory in the court of impeachment

WASHINGTON  — Donald Trump was acquitted Saturday of inciting the horrific attack on the U.S. Capitol , concluding a historic impeachment trial that spared him the first-ever conviction of a U.S. president but exposed the fragility of America’s democratic traditions and left a divided nation to come to terms with the violence sparked by his defeated presidency, AP reported.

Barely a month since the deadly Jan. 6 riot that stunned the world, the Senate convened for a rare weekend session to deliver its verdict, voting while armed National Guard troops continued to stand their posts outside the iconic building.

The quick trial, the nation’s first of a former president, showed how perilously close the invaders had come to destroying the nation’s deep tradition of a peaceful transfer of presidential power after Trump had refused to concede the election. Rallying outside the White House, he unleashed a mob of supporters to “fight like hell” for him at the Capitol just as Congress was certify Democrat Joe Biden’s victory. As hundreds stormed the building, some in tactical gear engaging in bloody combat with police, lawmakers fled for their lives. Five people died.

The verdict, on a vote of 57-43, is all but certain to influence not only the former president’s political future but that of the senators sworn to deliver impartial justice as jurors. Seven Republicans joined all Democrats to convict, but it was far from the two-third threshold required.