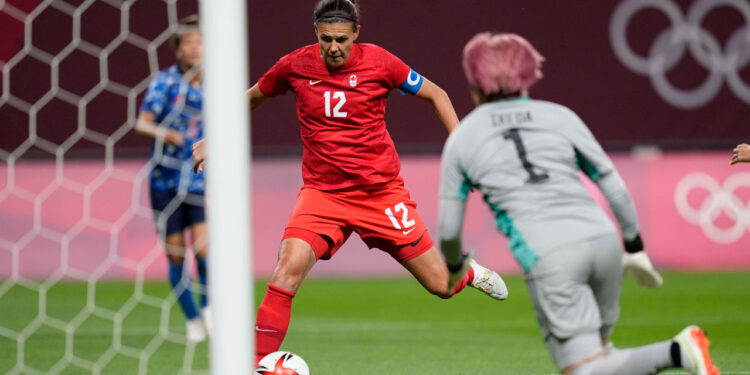 Canada's Christine Sinclair scores a goal against Japan during a match at the Tokyo Olympics, on July 21, 2021.

SAPPORO, Japan – Mana Iwabuchi scored in the 84th minute and Japan pulled into a 1-1 draw with Canada to open the Tokyo Olympic Games women’s soccer tournament on Wednesday.

Christine Sinclair, the all-time leading international scorer among men and women, scored her 187th career goal in the sixth minute to give the Canadians the early lead. It came in her 300th appearance with the team.

The Tokyo Games are Canada’s fourth Olympics. The team has won bronze medals in the last two.

Sinclair has played in all four appearances, scoring 12 goals in 15 games – including the game-winner against Brazil in the third-place match in 2016.

The Canadians are playing under coach Bev Priestman, who took over when Kenneth Heiner-Moller stepped down last June.

Japan, which qualified as hosts, did not make the field for Rio de Janeiro in 2016. Known as the Nadeshiko, Japan won silver at the 2012 London Games.

On the first day of sport at Tokyo 2020 and with the International Olympic Committee confirming the gesture did not violate its Rule 50 banning political statements, the United States and Sweden both followed suit ahead of their match, as did New Zealand.

For Team GB captain Steph Houghton it was important to follow through with a promise made before the Games.

“Taking the knee was something we spoke about as a group. We feel so strongly and we want to show we’re united,” she said according to Reuters.

“We want to fight all forms of discrimination and as a group of women we wanted to kneel against it.”

Black players in the England men’s team were subjected to a storm of online racist abuse this month after their Euro 2020 final defeat, drawing widespread condemnation from the squad’s captain, manager, royalty, religious leaders and politicians.

The IOC’s Rule 50 forbids any kind of “demonstration or political, religious or racial propaganda” in Olympic venues and any other Olympic area.