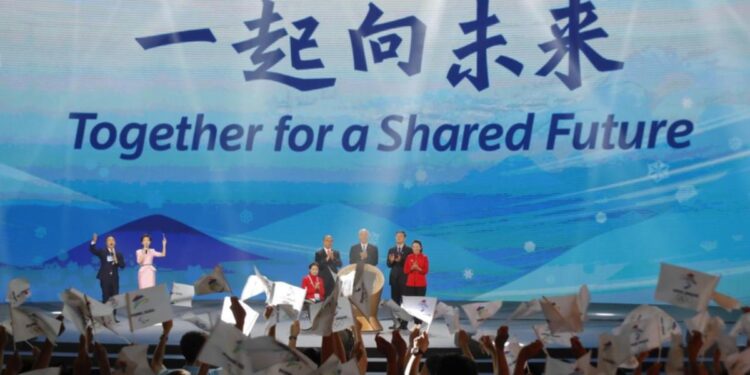 Singers perform on stage at a ceremony unveiling the slogan for Beijing 2022 Winter Olympics, in Beijing, China September 17, 2021.

BEIJING – The Beijing 2022 Winter Olympics unveiled its official motto, “Together for a Shared Future”, during a ceremony at the city’s Capital Museum.

Chen Ning, director general of Beijing 2022’s Culture and Ceremonies Department, said that the slogan was a commitment towards overcoming global challenges as a community with a shared future for mankind.

The motto was chosen after a lengthy process that included a total of 79 different proposals.

Earlier, the Beijing 2022 Winter Olympics will have tight Covid-19 countermeasures in place to ensure the safety of all participants, the International Olympic Committee (IOC) said.

Just over a month after the closing ceremony of the Tokyo 2020 Games, IOC President Thomas Bach said in an open letter that next year’s Winter Games would also require strict measures amid the ongoing pandemic.

“While the pandemic is far from over, I would like to reassure you that together with our Chinese partners and friends, we are sparing no effort to make these Olympic Winter Games safe and secure for everyone,” Bach said according to Reuters.

The Games will be held from February 4-20, with Beijing set to become the first city to host both the Summer and Winter Olympics.

“As we did in Tokyo, we are putting in place rigorous Covid-19 countermeasures to ensure the health and safety of all Olympic participants in Beijing,” the IOC president said, urging teams to get vaccinated and offering support in this process.

The vast majority of athletes and participants at the Tokyo Olympics were vaccinated.

Athletes were confined to the venues and the athletes’ village while other stakeholders were also monitored in their movements, as polls had showed the majority of Japanese wanted the Games postponed or canceled for fear of becoming a superspreader event.

The Tokyo Games had been delayed by a year and were eventually held in a state of emergency and without spectators or international visitors as Japan struggled with rising cases.

“The excellent cooperation that we are enjoying with our Chinese partners and friends, as well as the relevant Chinese health authorities, gives us all great confidence that we will again have safe and secure Olympic Games,” Bach said.

Beijing will become the first city to host both Winter and Summer Olympics, after staging the 2008 Summer edition.

Meanwhile, the Beijing 2022 Winter Olympics torch lighting ceremony will be held without spectators in Greece’s ancient Olympia on Oct. 18 and the flame will depart for China the very next day, Greek officials said.

The flame for each Olympic Games is traditionally lit by the rays of the sun and the use of a parabolic mirror in a ceremony at the site of the ancient Olympics, followed by a six-day relay across Greece before departing for the next host city.

But there will be no relay in Greece this time, with the flame being taken to Beijing on Oct. 19.

There will also be no fans on the grassy slopes of the ancient stadium when the flame is lit due to the Covid-19 pandemic. Beijing will host the Games on Feb. 4-20.

The torch lighting ceremony for the Tokyo 2020 Olympics in March last year was also held without crowds. The Games were eventually postponed by a year.

Following a meeting between Greek authorities this week, including police and the country’s Olympic committee and Chinese Games organisers, it was decided to hold the ceremony in ancient Olympia without fans.

“The dangers posed by Covid-19 were taken into account in the decisions and the protocol for the event,” Greece’s citizen protection ministry said in a statement according to Reuters.

The flame will then be transported to the Athens Acropolis on Oct. 18 before being handed over to Chinese organisers a day later in a brief ceremony at Athens’ Panathenaic stadium.