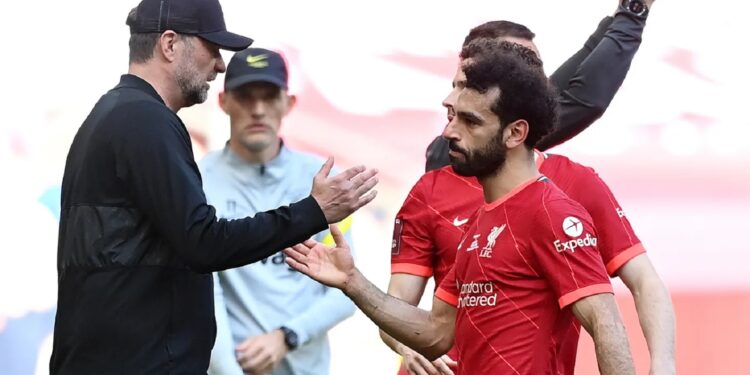 Liverpool's Mohamed Salah with manager Jurgen Klopp after being substituted at the FA Cup - Final against Chelsea on May 14, 2022.

LONDON – Liverpool manager Jurgen Klopp said he would like to call upon Mohamed Salah, Virgil van Dijk and Fabinho for Sunday’s crunch English Premier League clash against Wolverhampton Wanderers but added he was unsure if they would be fit in time.

Liverpool needs to beat Wolves at Anfield on the final day and hopes Manchester City drop points against Aston Villa to clinch a second league title in three seasons.

Salah and Van Dijk missed the midweek win at Southampton due to injuries sustained in last week’s FA Cup final against Chelsea while Fabinho suffered a muscle problem against Villa earlier this month.

“It looks good but the boys make steps and we will see,” Klopp said according to Reuters.

“My preferred solution would be that they all could play at the weekend for rhythm reasons… but if not, then we take it from there. I cannot say 100%.

“I actually understand 100% (Salah’s) goalscoring battle with Son Heung-min but we have no chance that we take any risks. But Mo doesn’t want to take any risks, there is no doubt about that,” he added.

Salah leads the golden boot race with 22 goals, one more than Tottenham Hotspur’s South Korean forward Son who will come up against relegated Norwich City on Sunday.

Klopp confirmed that Divock Origi will leave the club after eight years and paid tribute to the Belgium striker who has become a cult figure at Liverpool after scoring a number of crucial goals.

“I expect Div to get a special farewell. For me, he will always be a Liverpool legend and it has been a joy to work with him,” said the German.

“He’s one of the most important players I ever had. Wherever he will go he will be successful, 100%.”

Liverpool, who faces Real Madrid in the Champions League final on May 28, have already, won the two domestic Cups and Klopp said their campaign would qualify as a success regardless of what happens against Wolves.

“It’s been tough but great, a joy to be part of this season. It’s exceptional this group… we have so many reasons to celebrate.