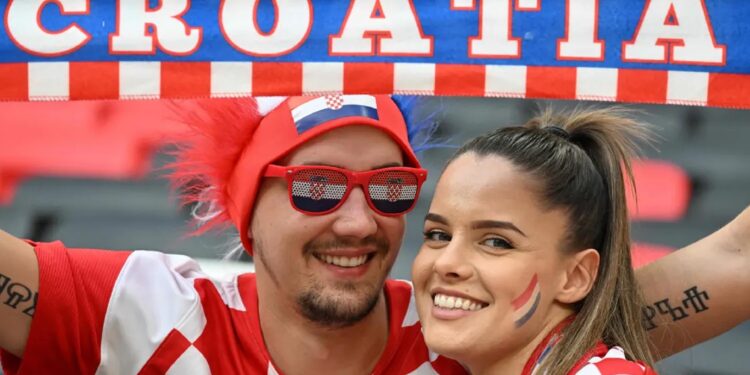 Supporters of Croatia before the start of Group F match against Belgium on Dec. 1, 2022.

LUSAIL, Qatar — Japan came from behind to defeat Spain 2-1 in a result that put both teams into the last 16 of the World Cup. Croatia needed a draw to advance, and it did just that, knocking out Belgium, as Germany was eliminated from the group stage for the second tournament in a row.

Japan staged their second stunning turnaround of the World Cup to beat 2010 champions Spain 2-1 with two quick-fire goals and advance to the last 16 along with their beaten opponents, dumping Germany out in the process.

The prospect of an early World Cup exit for Japan was transformed into one of the greatest nights for the Samurai Blue after coach Hajime Moriyasu revamped his side at halftime.

Ritsu Doan, one of the substitutes, hammered in a shot from the edge of the box in the 48th minute which Spain goalkeeper Unai Simon – whose poor clearance had created the danger – could not keep out.

Three minutes later, Ao Tanaka scored from point-blank range after the other halftime sub Kaoru Mitoma cut the ball back from the byline.

The VAR system took several minutes to confirm the ball had not gone out before Mitoma’s touch, sparking wild celebrations by the Japan players and their fans similar to the scenes that followed their 2-1 comeback win over Germany last week.

Japan, who has never progressed beyond the first knockout round, will face Croatia in the last 16 and Spain will meet Morocco.

Spain had looked in total control in the first half but were suddenly clinging to their chance of staying in the World Cup as Costa Rica and Germany battled out their own drama in the other Group E match which ended in a 4-2 win for Germany, not enough to keep them in the tournament.

Alvaro Morata had put the Spaniards ahead when he scored his third goal in three games in Qatar, rising high above Japan’s defence to power a header past goalkeeper Shuichi Gonda in the 11th minute after a cross by Cesar Azpilicueta.

The breathtaking 2-1 win for Japan – who also beat Germany 2-1 after going behind in their opening match of the tournament – meant they topped Group E, followed by Spain in second who finished ahead of third-placed Germany only on goal difference.

Belgium out of World Cup

Croatia reached the last 16 of the World Cup after a tension-filled 0-0 draw with Belgium that ensured the last hurrah of the Belgian ‘golden generation’ ended in a dismal group-stage exit.

Roberto Martinez’s side, ranked second in the world and semi-finalists four years ago, needed a win at Ahmad Bin Ali Stadium to keep their hopes alive, but could not break down the Croats, who finished as Group F runners up behind Morocco.

Substitute Romelu Lukaku fluffed four golden chances to break the deadlock as Belgium cast off the shackles in the second half, although Croatia also had their own opportunities to find a winner.

Germany were dumped out of the World Cup despite a 4-2 win over Costa Rica after Japan sprung a major surprise in recording a 2-1 victory against Spain to top Group E.

Spain and Germany entered the final round of Group E matches as favourites to progress to the last 16, but Japan – who already beat Germany earlier in the tournament – ripped up the script.

Despite Spain taking the lead through Alvaro Morata, Japan hit back with two second-half goals to seal another famous win.

Although Germany battled back from a 2-1 half-time deficit to claim a 4-2 victory, they were eliminated on goal difference after finishing level on four points with Spain.

Japan top the group with six and Costa Rica finished last with three. Japan now face Croatia in the last 16, while Spain take on Morocco.

Spain had looked in total control at half-time against after taking the lead through Morata’s early header.