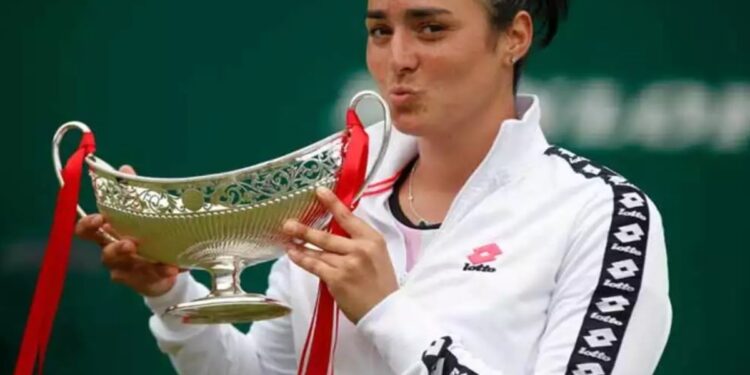 Tunisia's Ons Jabeur celebrates with the trophy after winning her final match against Russia's Daria Kasatkina.

BIRMINGHAM, England – Tunisian tennis star Ons Jabeur became the first Arab woman to win a WTA title when she beat Daria Kasatkina of Russia 7-5, 6-4 in an engrossing hour and a half tussle in Birmingham.

Jabeur, the second seed, gained a measure of revenge as she secured her first title at the expense of Kasatkina, one of two women to have beaten her in her previous finals appearances. “I knew I had to go for it, I had to win this title to at least breathe and give an example,” said Jabeur according to AFP.

“There’s not a lot of Tunisian or Arabic players playing, so I hope this could inspire them, and I want to see more Arabic (players) and Tunisians playing with me on tour.”

Jabeur, ranked 24 in the world, has been in fine form this season where she ranks alongside former world number one Ashleigh Barty in terms of matches (28) won.

The 26-year-old held her nerve despite Kasatkina breaking back when Jabeur served for the first set at 5-4.

Jabeur, though, broke world number 35 Kasatkina immediately and this time she made no mistake in serving to win the set.

Kasatkina had beaten Jabeur twice in three-set affairs. However, her opponent did not give her a sniff of a chance of a repeat of forcing her into a decider as she raced into a 4-0 lead in the second set.

Kasatkina, winner of two titles this season, fought her way back to 4-3 down but the Tunisian remained focused, sealing the title on her first match point when the Russian netted.

Jabeur revealed the pain of her defeat to Kasatkina in a final in Moscow in 2018 where she pleaded with her to be more generous the next time they met.

“Last time we played was in Moscow, she (Kasatkina) won, and I was crying, it was a great battle,” said Jabeur.

“I told her, ‘Can you please share some titles with me, at least, let me win my first WTA?'”