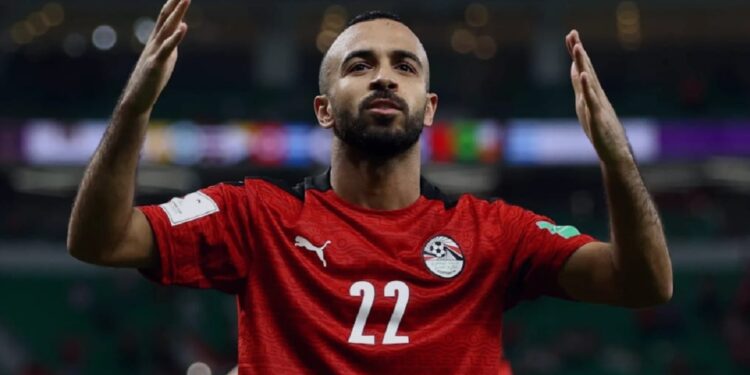 DOHA – A year has gone by since Mohamed Magdy, who goes by the nickname “Afsha”, notched a late winning goal in the 2020 CAF Champions League final for Egyptian giants Al-Ahly against their rivals Zamalek. That timely strike also provided Al-Ahly with the opportunity to compete in the FIFA Club World Cup for the sixth time in their history.

Over the twelve months that proceeded that memorable moment, Afsha has played a prominent role in a number of different tournaments for both club and country. On Wednesday in Qatar, he again proved his worth to his nation by opening his account at the FIFA Arab Cup 2021.

That goal – a coolly slotted penalty – sealed a 1-0 victory for the Pharaohs in their Group D clash with Lebanon at Al-Thumama Stadium, one of the arenas that will play host to FIFA World Cup™ matches next year.

In February, Afsha starred for Al-Ahly at the Club World Cup, playing in all three of the Red Devils’ matches and helping to propel the African side to an impressive third-place finish.

On the international stage, the Giza native also shone brightly. In September and November he bagged two important goals for Egypt in the second round of African qualifiers for Qatar 2022, easing his country’s passage into the decisive third round. Following the aforementioned win in the Arab Cup, he spoke to FIFA.com about some of his recent successes.

“It’s pretty important for me, as a player, to make my mark in every tournament I play in,” Afsha explained. “I always try my best to help my club and national team to win – that’s the only thing that counts.”

He continued: “I scored goals for my club in the African Champions League and for my country in qualifiers for the World Cup and the African Cup of Nations. And now today I’ve done it at the Arab Cup, too! I didn’t manage to hit the net at the Club World Cup last year, but I hope that, with a bit of luck, I’ll do so at the next one.”

Afsha has been a huge fan of football since he was a boy, and it was that passion for the sport that earned him the nickname by which he is now widely known, because as a child he would carry the ball with him wherever he went, going as far as to even take it to bed with him.

While he is renowned for his skills on the pitch, the midfield man, who pulled on the jerseys of three other Egyptian clubs before signing for Al-Ahly in 2019, is also known for his good humour off it. When asked about his record from the penalty spot – both of his goals in World Cup qualifying matches came from the spot, as did his 71st-minute winner versus Lebanon on Wednesday – with the national team, he broke into a trademark grin.

“Honestly, there’s no big secret behind it – it’s just a great scoring run,” he said. “Personally speaking, I hope that we get a penalty in every game and that we score every time. It doesn’t matter if it’s me or another team-mate who takes it; the most important thing is that the team wins.”

If Egypt’s good form continues, Afsha could well have plenty more opportunities to add to his tally from the spot. And if he and his compatriots end up lifting the Arab Cup, 2021 is likely to go down as one of the most memorable years of his career.