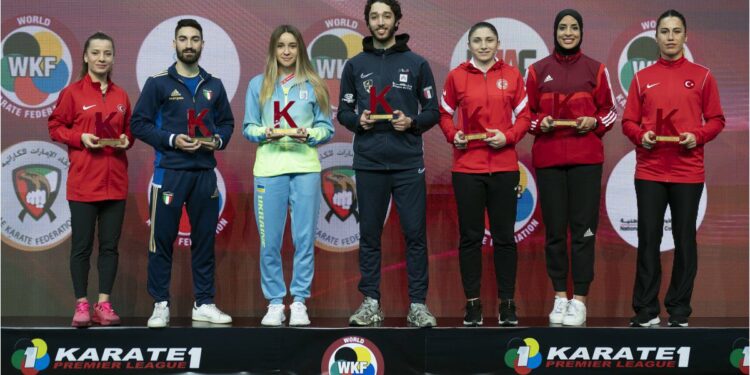 Egypt’s karate team performed wonderfully in the 2022 Karate 1-Premier League in Fujairah, the UAE, having won over nine medals in different levels.The performance of the team was seen as an amazing show of athleticism.

Egypt topped the list of winners at the competition, after claiming three gold medals in its final day.The title count for the powerhouse nation started in Male Kumite – 75kg.

The silver medals were claimed by Yasmine el-Juweili Kumite under 50 kg, Mohamed Ramadan Kumite under 84 kg, and Taha Mahmoud Kumite at over 84 kg.

Also the bronze medals went to Ahlam Youssef Kumite, 55 kg, Ali El-Sawy Kumite, under 67kg, and Feryal Ashraf, the gold medalist in the Tokyo Olympics, in the 68kg Kumite competitions.

The final men’s Kumite gold medal went to Abdallah Hammad of Jordan in the under-60kg category after he scraped a 1-0 win over Iurik Ogannisian of Russia.

Anna Chernysheva of Russia headed the revolution of up-and-coming karatekas in Fujairah.

It is Chernysheva’s second consecutive gold in Karate 1-Premier League after her victory at home in Moscow last year.

Ali el-Sawy and Feryal Ashraf also topped the final standings of the Karate 1-Premier League after the joint season 2020-2021.

In addition to receiving the trophy and prize money, the Grand Winners earn the right of wearing the special karategi with the golden embroidery on the shoulders throughout the whole season.

After the thrilling event in Fujairah, the Karate 1-Premier League travels now to Oporto, Portugal, where the second event of the season will be held from April 22 to 24 this year.