by News Wires
in Egypt, Entertainment
0 0
0 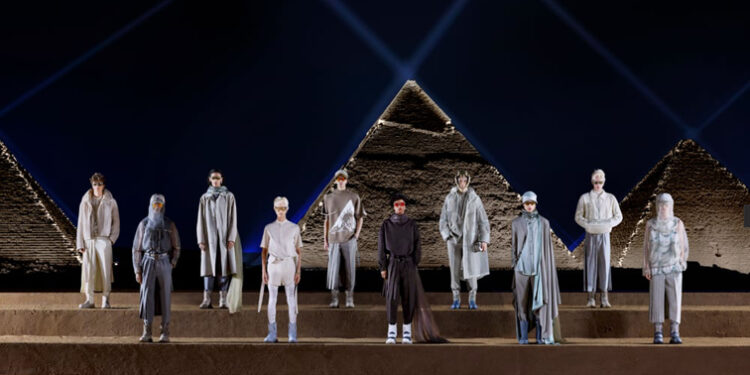 Egypt is using the ancient grandeur of its pyramids as a backdrop for modern pop concerts and fashion shows, hoping to boost its image, tourism and the luxury brand sector beloved by its moneyed elite.

Before that, American pop bands Maroon 5 and the Black Eyed Peas performed at the Giza Necropolis, where contemporary art was also recently shown at the latest Art d’Egypte exhibition.

The modern cultural push is a new direction for Egypt’s image.

Long a cultural powerhouse in the Arab world, with wildly popular singers and movie stars especially in its heyday in the 1950s-70s, Egypt has set its sights on its ancient heritage to attract the global spotlight once more.

A harbinger of the new embrace of ancient culture and history was a “golden parade” last year of 22 pharaohs that crossed Cairo from an old to a new museum in a carnival-style grand spectacle.

It was part of a push by President Abdel Fattah El Sisi’s government to revive tourism, which accounts for 10 per cent of GDP and some two million jobs but has been hammered by political unrest, economic upheaval and the Covid pandemic.

Big brands like Dior “come in with a huge budget,” employ local talent and “support young creators who can put Egypt on the global fashion map”.

Iman Eldeeb, whose agency cast two Egyptian models for Saturday’s show, told AFP it was a “long-awaited step for the fashion world in Egypt”.

Egypt, the Arab world’s most populous country, is home to 86,000 millionaires, according to the bank Credit Suisse.

The boutiques in the shopping centres of Cairo’s chic new satellite cities, she said, are “up to the standards of international luxury brands”.

Shehab, the art historian, said many realise that Egypt, known for its timeless architectural marvels in the desert, needs to project an updated image of itself.

“There’s more and more awareness about the need for soft power and for culture as a representation for the country,” she said, cautioning however that Egypt still requires “better infrastructure” to make this happen.

She even dared dream that Egypt could draw in Hollywood productions, if it only starts granting permits.