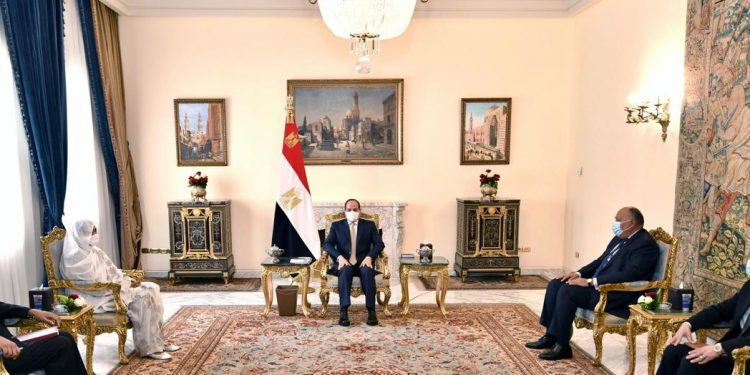 President Abdel Fattah El Sisi affirmed Egypt’s strategic approach towards supporting bilateral relations with Sudan for the sake of co-operation, construction and development in order to consolidate the eternal partnership and relations between the people of the Nile Valley. He added that the security and stability of Sudan was an integral part of Egypt’s security and stability.

The president expressed Egypt’s support for all efforts to promote peace and stability in Sudan during that pivotal stage in its history.

President Sisi also affirmed Egypt’s interest in strengthening bilateral relations with Sudan, especially in the fields of electricity, railway and trade in addition to Egypt’s readiness to continue transferring its experience in economic reform and training Sudanese cadres.

President Sisi also affirmed Egypt’s firm position on the imperative to reach a binding legal agreement regarding filling and operating the Grand Ethiopian Renaissance Dam (GERD), taking into account not harming the two downstream countries and preserving their water rights.

The president and the Sudanese foreign minister agreed to intensify mutual coordination between Egypt and Sudan in the coming period regarding this vital issue.

Meanwhile, Al-Mahdi expressed Sudan’s aspiration to develop mutual efforts to improve the bonds of joint co-operation between the two countries. She also appreciated the sincere Egyptian support to preserve the safety and stability of Sudan in the light of the important historical juncture it is going through.

She also said Sudan was looking forward to benefitting from the inspiring Egyptian experience in the field of economic reform that achieved great success.

Earlier in the day, Foreign Minister Shoukri met his Sudanese counterpart and discussed opportunities to develop co-operation in the field of investment and the available opportunities for Egyptian companies to invest in Sudan in such a way that achieves mutual interests of both parties.