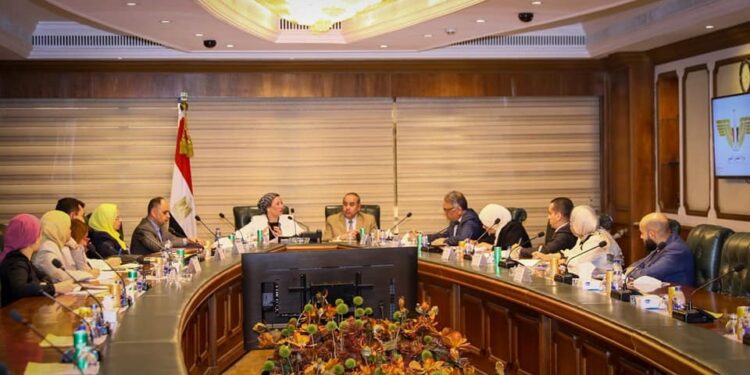 Minister Manar and Minister Fouad during their meeting on Thursday.

Minister of Civil Aviation, Mohamed Manar, met on Thursday Environment Minister, Yasmeen Fouad, to follow up on preparations for the United Nations climate conference, COP27, which will be held in Sharm el-Sheikh in November of this year.

The two ministers reviewed arrangements for this major global event, highlighting the importance of the event coming out in a way that befits Egypt’s status and capabilities.

They also discussed Ministry of Civil Aviation work files in connection with the conference.

The two ministers, meanwhile, reviewed progress on the implementation of the project for converting Egyptian airports into environmentally friendly ones, including through the use of solar cell systems.

Minister Manar said preparations for the conference come at the forefront of the priorities of his ministry for the coming period, in the light of directives by the political leadership.

The Ministry of Civil Aviation, he said, would provide all facilities and logistical services to conference participants on board EgyptAir planes and at the nation’s airports.

He added that his ministry is in continuous coordination with all other ministries and state agencies on the conference.

“We also coordinate with the Ministry of Environment regarding this important event,” the minister said.

He praised the work done by the workteams of the different ministries in preparation for the conference.

This work, he said, would contribute to making the conference a success.

Minister Fouad, for her part, referred to the importance of coordination on the conference with the Ministry of Civil Aviation.

She said her discussions with the minister covered the services that would be offered to conference participants, in light of the commitments that have to be honoured by conference host countries.

Details about arrangements in this regard, she said, would be announced on the website of the conference.