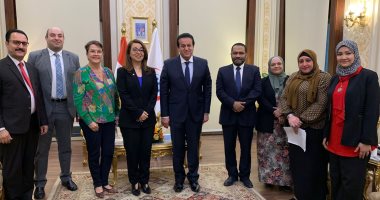 Spokesman for the Health Ministry Hossam Abdel Ghaffar said that the meeting took up expanding horizons of co-operation in the joint activities between both sides in the fields of combating AIDS, drug addiction and contagious diseases.

The spokesman said that the minister reviewed the efforts of the ministry to curb AIDS cases and the mechanisms of providing the diagnoses and treatment services to the patients, allocate clinics for viruses all across Egypt and the impact of the efforts exerted for early detection of AIDS.

Both sides discussed the possibility of organising workshops with the participation of international experts for co-operation in training medical teams on the latest protocols of diagnosing and treating AIDS in addition to co-operation in the field of scientific research and increasing health awareness on disease prevention especially between youth, the spokesman said.