UN chief warns millions of Afghans are on ‘verge of death’ 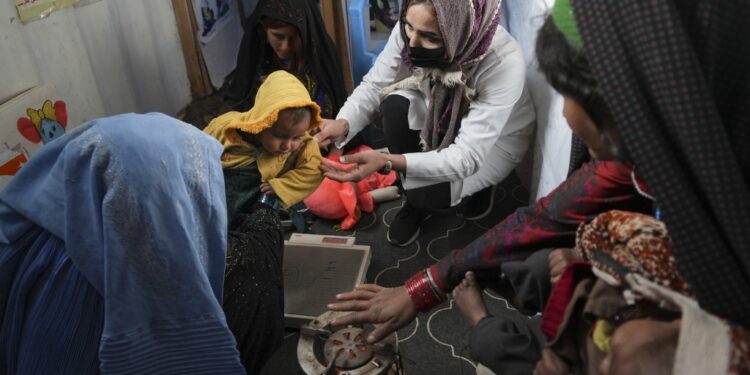 A nurse checks the weight of a child in a makeshift clinic organized by World Vision at a settlement near Herat, Afghanistan, Dec. 16, 2021.

UNITED NATIONS – The United Nations chief warned that millions of Afghans are on the “verge of death,” urging the international community to fund the UN´s $5 billion humanitarian appeal, release Afghanistan´s frozen assets and jump-start its banking system to avert economic and social collapse.

Secretary-General Antonio Guterres told reporters that “freezing temperatures and frozen assets are a lethal combination for the people of Afghanistan,” and “rules and conditions that prevent money from being used to save lives and the economy must be suspended in this emergency situation.”

Afghanistan´s aid-dependent economy was already stumbling when the Taliban seized power in mid-August amid the departure of US and NATO troops after 20 years.

The international community froze Afghanistan´s assets abroad and halted economic support, unwilling to work with the Taliban, given their reputation for brutality during their 1996-2001 rule and refusal to educate girls and allow women to work.

The UN said according to AP that 8.7 million Afghans are on the brink of starvation and Guterres said it´s critical to rapidly inject liquidity into the Afghan economy “and avoid a meltdown that would lead to poverty, hunger and destitution for millions.”

It´s “absolutely essential” to avoid a breakdown, he stressed, “because with the present situation you have Afghans on the verge of death.”