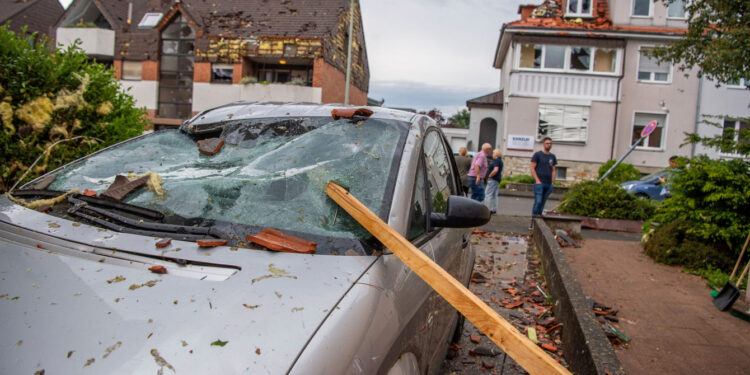 BERLIN – Violent storms buffeting western Germany killed at least one man and injured some 40 people, 10 of them seriously, when an apparent tornado raked several towns, police and local media said.

Images on social media showed an apparent tornado with its distinctive spinning cyclone flinging debris through the air, though the German Weather Service did not immediately confirm a tornado had occurred.

The 38-year-old man in the far-western town of Wittgert died of head injuries sustained when he fell after suffering an electric shock in a flooded cellar, local media quoted police as saying.

Police said up to 40 people had been injured in Paderborn, a town of some 150,000 half-way between Frankfurt and Hamburg. Rail and road transport were disrupted throughout the region.

In nearby Hellinghausen, images shared on social media showed that a steeple had been ripped from the roof of a church tower, its remains scattered around the churchyard.

Police posted images showing trees felled or split in half, as well as roofs that had been swept clean of tiles by the winds in Paderborn.

“Some 40 people were injured in the storm, at least 10 of them seriously,” city police said in a statement according to Reuters.

“Sheeting and insulation were blown kilometres (miles) away. Countless roofs are uncovered or damaged. Many trees still lie on destroyed cars.”

They asked locals to stay at home. The German Weather Service warned that the stormy weather was set to continue.