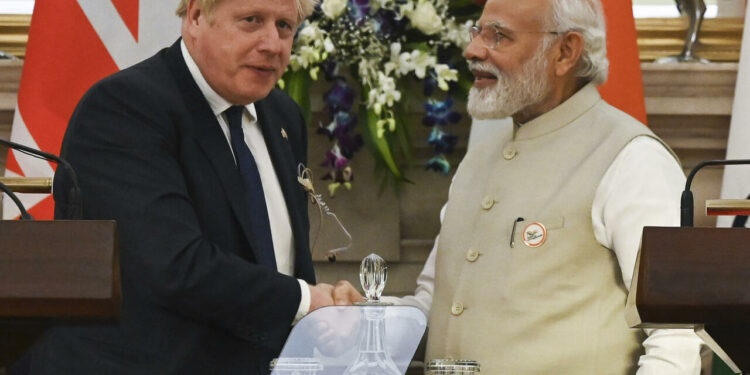 NEW DELHI – Britain and India agreed on Friday to step up defense and business cooperation during a visit to New Delhi by Boris Johnson, who said a bilateral free-trade deal could be wrapped up by October.

On his first visit to the Indian capital as UK prime minister, Johnson discussed with his Indian counterpart Narendra Modi ways to boost security ties with India, which buys more than half of its military hardware from Russia.

India’s foreign secretary, however, said Johnson did not put pressure on Modi over New Delhi’s position on Russia’s war in Ukraine.

“Prime Minister Johnson shared his perspective on it, Prime Minister Modi shared ours – which is that the Russia-Ukraine war should end immediately,” Harsh Vardhan Shringla told reporters according to Reuters. “There was no pressure of any kind.”

India abstained from a United Nations vote condemning the invasion and unlike Britain and other Western nations has not imposed sanctions on Moscow, which calls Russia’s actions in Ukraine a “special military operation.”

“We had wonderful talks that have strengthened our relationship in every way,” Johnson told a joint news briefing with Modi on the final day of his two-day trip.

“We have agreed a new and expanded defense and security partnership, a decades-long commitment that will not only forge tighter bonds between us, but support your goal of Make in India,” he said, referring to Modi’s domestic manufacturing push.

Johnson said negotiators from the two countries were expected to complete a free-trade deal by the end of this year.

“We’re telling our negotiators to get it done by Diwali in October. This could double our trade and investments by the end of the decade,” he said.