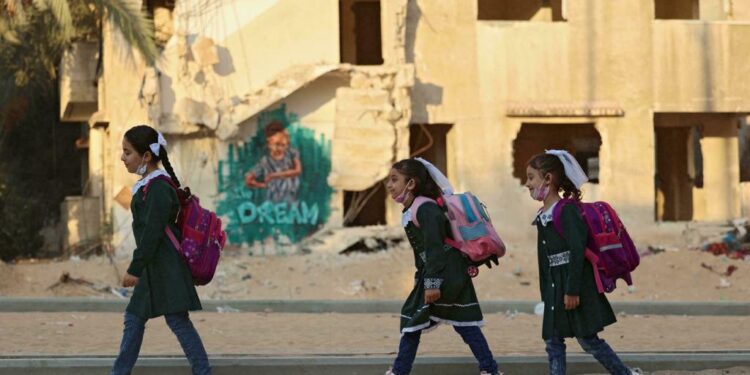 Palestinian children walk past a destroyed building on their way to school for the first day of the new scholastic year in Gaza City on August 16, 2021.

Beit Lahia – Eight-year-old Mohamed dreamed of returning to the classroom in Gaza for the start of the school year. But after an exploded missile blinded him in May, he is staying home.

Mohamed used to attend school with his cousins and neighbours in the town of Beit Lahia in the northern Gaza Strip.

He is one of hundreds of children the United Nations says were injured during fighting in May between Israel and the Hamas fighters who control the Palestinian enclave.

From May 10 to 21, the Israeli army pummelled the Gaza Strip in response to rocket fire by Hamas, according to AFP.

Mohamed said he was walking to a market to buy clothes during the conflict when a missile exploded.

As a result of the blast, his father Hani said, “Mohamed was injured in the eyes, which led to the loss of his eyes, and Mohamed became completely blind.”

The boy still hoped to return to school, Hani said, and his new disability left him moody and unpredictable.

Human Rights Watch (HRW) has accused Israel of war crimes during the conflict.

For now, Mohamed grips his father’s hand, his head facing down, as they walk through their neighbourhood.

At home, Hani guided his son to sit down on cushions and showed him the collared shirts of his school uniform.

Mohamed gripped a pen and tried to form letters in a notebook as his parents encouraged him.

“In the future, I hope he can go to a special school for the disabled,” said Somaya, Mohammed’s mother.

She took her son in her arms and burst into tears.