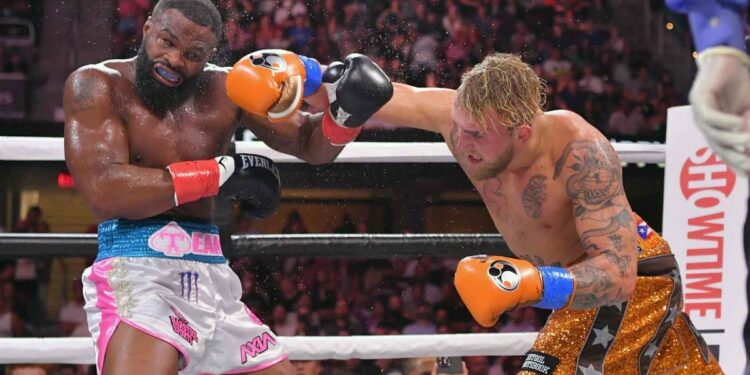 Jake Paul (R) punching Tyron Woodley during their match in Ohio on August 30, 2021.

LONDON – Tommy Fury said he has been forced to withdraw from his upcoming fight with YouTuber-turned-boxer Jake Paul due to a severe chest infection.

Tommy was due to face Paul on Dec. 18 in Tampa, Florida. He won on the undercard of Paul’s August fight against former UFC welterweight champion Tyron Woodley.

Tommy comes from a long line of boxers but has also looked to grow his celebrity outside the sport and appeared on the British reality show Love Island in 2019.

“I am absolutely heartbroken that I have been forced to withdraw from my fight with Jake Paul due to a bacterial chest infection and broken rib,” the 22-year-old Tommy said in a tweet posted by his promoter Frank Warren.

“I can’t express how disappointed I am and I really do hope we can get this fight rescheduled in the New Year, I want this fight to still happen more than anything,” he added according to Reuters.

With Tommy pulling out, Paul said he will have a rematch with Woodley. Paul and Woodley’s cruiserweight fight in August ended in a split-decision victory for Paul.

Fury’s promoter Frank Warren said: “We are gutted for Tommy. This was a big opportunity for him to show the world what he can do. Unfortunately, he’s had to withdraw now as he’s clearly not anywhere near 100 per cent. We’ll be working with Jake Paul’s team to see if we can reschedule for the New Year.”