Spain passes Sweden in Group B of European qualifying 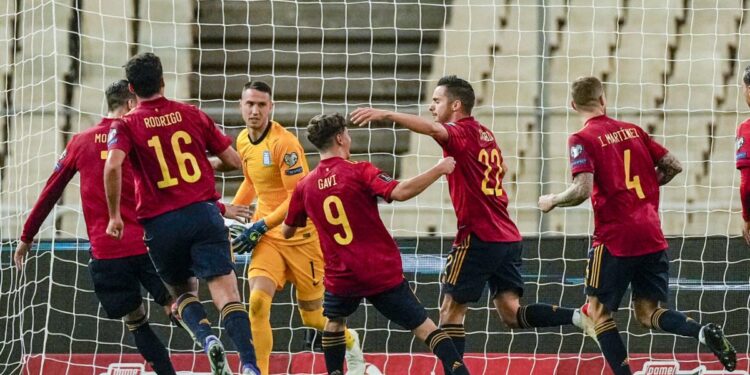 Spain's Pablo Sarabia (C) celebrates with teammates after scoring the opening goal from a penalty kick during the World Cup 2022 group B qualifying match against Greece in Athens.

ATHENS, Greece – Spain took a big step toward securing an automatic spot in next year´s World Cup in Qatar by defeating Greece 1-0 after Sweden stumbled against Georgia.

Pablo Sarabia converted a penalty kick in the first half to lift Spain past the Swedes at the top of Group B.

Spain will host Sweden in their final qualifier on Sunday carrying a one-point advantage, needing a draw to secure first place and the automatic berth.

Sweden, which had already secured at least a second-place finish, lost 2-0 at Georgia.

Only the group winners automatically qualify, while the second-place finishers will have to go through a playoff with the other runners-up and two group winners from the UEFA Nations League.

Greece needed a victory to keep alive its chances of finishing in the top two, AP reported.

Sarabia scored from the penalty spot in the 26th minute after video review confirmed a foul on defender Inigo Martínez inside the area.

Greece had a goal by Giorgos Masouras disallowed for offside just a few minutes before the penalty.

Spain has qualified for every World Cup since 1978, winning its lone title in 2010 in South Africa. It was eliminated by host Russia in the last 16 of the 2018 World Cup.

Elsewhere, missing five players in coronavirus isolation, Germany eased to a 9-0 win over 10-man Liechtenstein in World Cup qualifying as North Macedonia and Romania stayed in the fight for a playoff spot.

After defender Niklas Süle tested positive for the virus on Tuesday, four of his Germany teammates were ordered to isolate as close contacts.

Already assured of qualifying for the World Cup, Germany’s straightforward task against Liechtenstein was made even easier when the Liechtenstein defender Jens Hofer was sent off after just nine minutes.

Hofer accidentally kicked Germany midfielder Leon Goretzka in the face as they challenged for a high ball and immediately recognized his error, holding Goretzka to break his fall. After being red-carded for dangerous play, Hofer left the field arm-in-arm with the player he’d fouled.

Ilkay Gündogan converted the penalty, starting a run of Germany goals. Leroy Sané and Thomas Müller finished with two goals each. Marco Reus and Ridle Baku also scored, along with two own goals.

Germany coach Hansi Flick has won all of his first six games in the job as his flying start continued on a night when his predecessor Joachim Löw was honored in a pre-game ceremony.