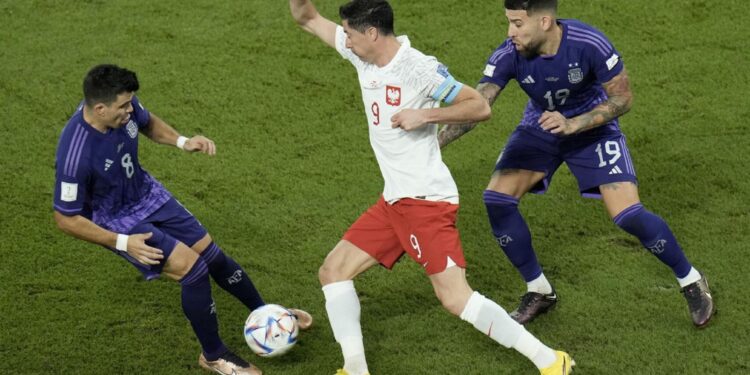 Poland’s Robert Lewandowski (C) fights for the ball with Argentina’s Marcos Acuna (L) and Nicolas Otamendi during their group C match on Nov. 30, 2022.

AL-RAYYAN, Qatar — Poland’s World Cup last-16 exit ended a run fuelled by hopes and dreams but their fighting spirit was a fitting tribute on Miners’ Day in Poland to celebrate their patron saint of ‘hard work and good death’.

Poland showed plenty of heart to finish above Mexico and reach the second round from a tricky Group C and managed to keep the mighty reigning champions France at bay for large periods before Olivier Giroud and Kylian Mbappe stole the show.

An entire generation of Poland fans had never watched their country play in the knockout stages of the World Cup but a first appearance in 36 years has sown the seeds of progress for a team considered perennial underdogs at international tournaments.

“Getting out of the group stage after 36 years was our main objective. We succeeded, but in the next round we faced the world champions,” Poland coach Czeslaw Michniewicz said.

“We are very sorry; we’re sad and disappointed… As more time passes, we’ll change our perspective. After weeks and months, we can proudly say we achieved what Poland wasn’t able to achieve in 36 years,” Michniewicz added according to Reuters.

Although Michniewicz’s side showed they had strength at the back, they were unable to flex their muscles in attack in Qatar despite being spearheaded by one of the most feared strikers in the world in Robert Lewandowski.

Poland’s defensive record in the group stage was among the best in the tournament as they conceded only two goals — both against a fired-up Argentina side in a 2-0 defeat after a goalless draw with Mexico and 2-0 win over Saudi Arabia.

Wojciech Szczesny’s stock has only risen in recent years with Juventus, and Michniewicz gave the shot-stopper a vote of confidence when he named him as his number one to start all games when, in the past, the Polish goalkeepers had been rotated.

The faith placed in Szczesny reaped dividends as the 32-year-old, arguably Poland’s best player in Qatar, made a tournament-high 18 saves in the group stage.

It included an eye-watering nine saves against Argentina where he even denied Lionel Messi from the penalty spot while Szczesny also kept France out several times before the world champions broke the deadlock and went on to win 3-1.

At the other end of the pitch, the hardworking Lewandowski huffed and puffed, but he cut a lonely and frustrated figure in the final third as he struggled to reproduce his golden form for Barcelona after arriving at the finals.

The striker netted 18 goals in 19 appearances for the Spanish club in the first half of the season but scored only twice in Qatar after he missed a penalty in their opener against Mexico and received little support from his team mates.

The 34-year-old had been vocal about wanting to be paired up front alongside another striker to share the load but that has not always been the case since the conservative Michniewicz took charge of the national team.

“This is a long story, I cannot tell you every part of it. There’s definitely a problem offensively,” Michniewicz had said before the defeat by France.

“It is a fact that we played difficult passes in easy situations, we were not accurate enough and didn’t create enough opportunities for Robert.

“There’s no other strategy for such forwards. They need to be near the penalty box… In order to take advantage of every striker in our team, we need to bring them closer to the right zone. You can’t score from your own half.”

Lewandowski and Szczesny may not be around for the 2026 edition after both players admitted the tournament in Qatar could be their last World Cup.

The baton of leadership will have to be passed on to players such as experienced Napoli playmaker Piotr Zielinski and striker Arkadiusz Milik.

As for Michniewicz, his future is up in the air after he was brought in on a deal until the end of 2022 when Paulo Sousa quit less than a year before the World Cup.