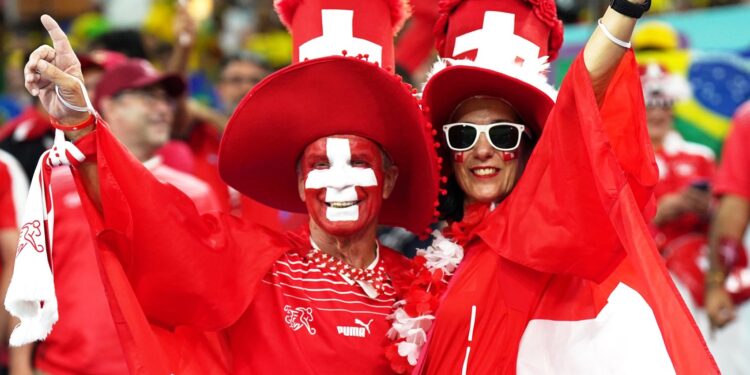 Supporters gesture during group G match between Serbia and Switzerland on Dec. 2, 2022.

AL-SHEHANIYA, DOHA – Portugal coach Fernando Santos has been boosted by news that key midfielder Otavio should be fully fit and ready to play in their World Cup last-16 match against Switzerland on Tuesday.

After missing the last two games with a thigh injury, the Porto midfielder joined his team mates for training for the first time since their opening win over Ghana.

His replacement in the last two matches was 39-year-old defender Pepe, who is likely to keep his place and be tasked with marking Swiss striker Breel Embolo, who has scored twice in the tournament.

Pepe will be paired with Manchester City centre back Ruben Dias, who was rested for their last group match against South Korea which Portugal lost 2-1.

Santos was forced into a change at left back after Nuno Mendes was ruled out of the World Cup due to an injury suffered in the first half against Uruguay.

Santos switched Joao Cancelo to the left and brought in Diogo Dalot at right back and the coach is expected to keep the same formation against Switzerland.

Captain Cristiano Ronaldo will bid again to equal the record of World Cup goals scored for Portugal held by Eusebio, who racked up nine in 1966 in England.

Switzerland has their own forward seeking a place in the record books.

Xherdan Shaqiri’s goal against Serbia in the group stage meant he has found the net in more World Cup tournaments than any other Swiss player, having also scored in 2014 and 2018.

He is one goal away from matching the most World Cup goals scored by a Switzerland player – six, by Sepp Huegi all in 1954.

The Swiss quietly finished second in their group behind Brazil, victories over Cameroon and Serbia earning their place in the last 16. 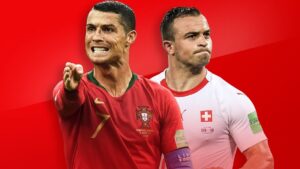 “I’m sure we’ll face a Swiss team with a lot of possession and we are ready for that, There have been surprises (at this World Cup), that’s a fact, we need to be focused from the first minute to the last so that things go our way, and not the other way,” midfielder William Carvalho said.

The Portuguese were on the wrong end of one of those shocks, losing 2-1 to South Korea before bouncing back with wins over Ghana and Uruguay that put them through as Group H winners.

A European champion with Portugal in 2016, Carvalho spoke to reporters, keeping his answers short ahead of his side’s training session as the sun went down.

“I think Portugal needs to play like we did in the first two games – united, from start to finish. We know that we will be up against a very tough opponent, and the details will make all the difference, we need to be ready,” he said.