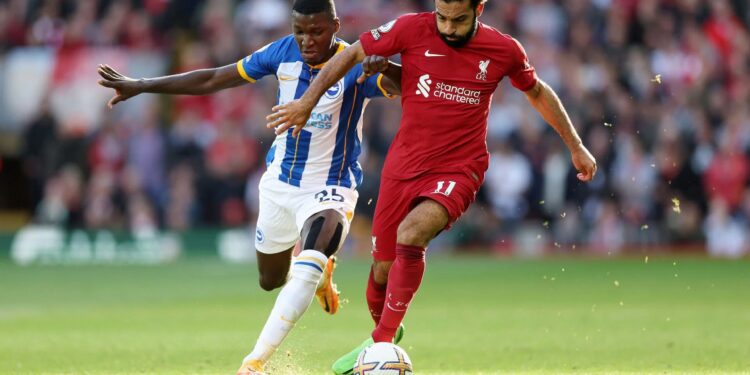 Liverpool’s Mohamed Salah (R) could not summon his goal-scoring powers to see off Brighton.

LONDON — Arsenal retained their place at the top of the English Premier League table with a fine north London derby victory over 10-man Tottenham. Liverpool trail Arsenal by 11 points after a hat-trick from Leandro Trossard earned Brighton a 3-3 draw at Anfield in Roberto De Zerbi’s first game in charge of the Seagulls.

A rare Thomas Partey strike and goals from Gabriel Jesus and Granit Xhaka secured a well-deserved 3-1 win, Spurs losing for the first time in the league this season having equalised through Harry Kane’s penalty.

Partey got the ball rolling with his first Arsenal goal from outside the box in his 65th match for the Gunners before Kane levelled from the spot to take his tally in this fixture to 14 in 18 appearances.

But the second half belonged to the hosts, Jesus striking on his north London derby debut and Xhaka continuing a fine run of form either side of Emerson Royal’s red card for Spurs.

Liverpool trail Arsenal by 11 points after a hat-trick from Leandro Trossard earned Brighton a 3-3 draw at Anfield in Roberto De Zerbi’s first game in charge of the Seagulls.

Trossard scored twice inside the first 20 minutes as Liverpool were stunned but the hosts responded, Roberto Firmino pulling one back before the break and then equalising in the 54th minute.

An Adam Webster own goal nine minutes later looked like it had earned Liverpool the points but Trossard had the final say with an 83rd-minute leveller.

A last-gasp goal from Conor Gallagher earned Graham Potter a 2-1 victory against Crystal Palace in his first Premier League match since leaving Brighton to take charge of Chelsea.

Odsonne Edouard scored the opener for Palace in the seventh minute, with Pierre-Emerick Aubameyang equalising seven minutes before half-time on his first league start for the Blues.

It appeared Chelsea would have to settle for a point only for Gallagher, who starred for Palace on loan last season, to find the top corner with a brilliant first goal for his parent club.

Newcastle thumped 10-man Fulham 4-1 after Nathaniel Chalobah was sent off in the eighth minute for a challenge on Sean Longstaff.

Callum Wilson netted the opener three minutes later and it was three at half-time thanks to a brilliant goal from Miguel Almiron and one from Longstaff before Almiron added a fourth in the second half. Bobby Decordova-Reid grabbed a late consolation.

Everton came from behind to defeat Southampton 2-1 for their first away victory of the season.

In the late match, West Ham gained a much-needed three points in a 2-0 home victory over Wolves.

Gianluca Scamacca rifled home a volley in the 29th minute for his first Premier League goal and Jarrod Bowen added a second nine minutes after half-time.

Diego Costa made his Wolves debut as a second-half substitute but could not prevent Bruno Lage’s side dropping into the bottom three.