Koller eyeing to win everything with Al-Ahly 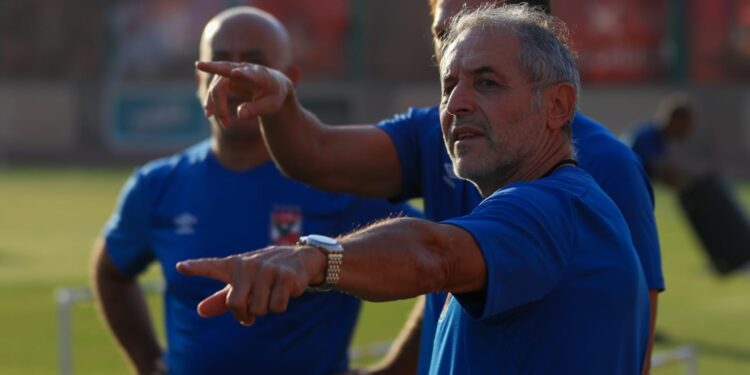 CAIRO — Al-Ahly’s new coach Marcel Koller revealed his excitement to join the African Club of the Century, describing his role as a new and different experience that will need a lot of hard work from everybody to accomplish great achievements.

“I want to win the CAF Champions League title and all the local championships. My goal is to win everything with Al-Ahly,” Koller said in an interview with the club official website.

“Coaching Al-Ahly is like a new challenge for me, and I want to win it. Working with a team like Al-Ahly is a great opportunity for me.

“Winning trophies requires a lot of effort and work, and I am confident that the players will do everything possible to win.”

“I always tell the players to show respect, put on a good performance, and focus. Also, they must develop their passing styles and press quickly to recover the ball when they lose it. The team will accomplish this by putting the opponent under constant pressure.”

“I gained a lot of experience through my work with clubs in Switzerland and Germany, and with the Austrian national team. I love this job and have great enthusiasm for it.”

Negotiations with the Club

“When I arrived in Cairo, I headed to the club. I felt a sensational feeling once I arrived, and this encouraged me a lot to do my best in the upcoming period with the team,” he explained.

“I have watched many games for Al-Ahly and I started to know a lot about the team, but to watch the players in person differ a lot. When I watch the players on the field, I recognize their performance and their capability of each of them. Also, when I watched the games I had several comments, which I will work on them with the players at the beginning,” the 61-year-old noted.

“I will not speak about the comments I had, as It is very important to speak with the players first. I have many ideas and the players must get used to these ideas to implement them on the field.”

“I underwent knee surgery in the previous two years. I had to take a break from my coaching career during that period. Also, we were in the middle of COVID-19 pandemic. During that time, I watched many games and I studied several different playing methods and tactics.”

“I developed my methods of training and came up with new ideas. I am certainly seeking to apply these methods with Al-Ahly and implement my philosophy of playing in a way that will lead the team to win championships.”

“No one will be able to achieve success alone. We certainly need the support of everyone in the club. We need your support as a media team and we need everyone’s support, even the janitors will have a role in the success.”

“It is very important to have this feeling in the team, and when we have this spirit, we will become stronger and things will get on the right path. The team must show high quality, not only in the training but also during the matches. You must give all that you got until the referee blew his final whistle.”

“My biggest challenge is working in a foreign country with a culture that differs from Europe. However, I will work on understanding these differences to achieve success. I visited Cairo in 1988 as a player with the Swiss national team against Egypt, and I still remember this visit,” ,” the Swiss tactician added.

“Grasshopper Club Zurich is a big club in Switzerland, but not as big as Al-Ahly. However, they had the mentality of winning every game. I had a great experience during the time I was playing with them, as we only aimed to win. Al-Ahly has the same winning culture, as the club always seeks to win all the titles.”

“I suffered from a strong injury in my knee when I was 19 years old, even before I got promoted to the first team. I knew that if I wanted to come back, I must have a strong mentality and determination and that I should work hard in order to return.”

“The mentality was the most important thing during that time. I worked hard with the doctors during my rehabilitation program to be able once again to play. I knew that I would work away from my friends and colleagues for a long time and that I will only train in the gym with the fitness coach.”

“For me, having a strong mentality was very important as it helped me to return once again. If I did not have this mentality, my career would have ended,” he concluded.