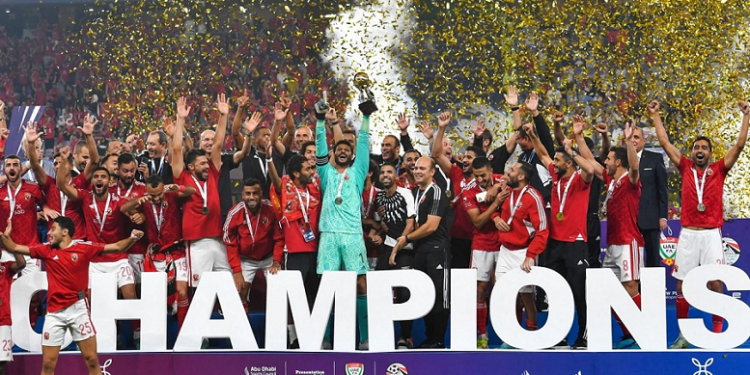 Al-Ahly players celebrate with the trophy of the Egyptian Super Cup after winning over Zamalek at the Hazza Bin Zayed Stadium in Al-Ain.

ABU DHABI – Al-Ahly’s technical coach Marcel Koller expressed his happiness after his side secured the Egyptian Super Cup title in Abu Dhabi, noting that the victory is a reward for the players on their hard work during the past period.

“Winning the title is a reward for our players on their hard work during the past period,” Koller said in his post-match comments.

“In the start of the second-half, Zamalek placed pressure on us. However, we were to cope to the pressure after making more than one substitution.”

The Red Devils secured a 2-0 win against arch rivals Zamalek in the Egyptian Super Cup thanks to goals from Bruno Savio and Karim Fouad.

With six of their 12 Super Cup victories coming at the cost of Zamalek, the win increased Al-Ahly’s record to 12 victories.

Ahly extended their Super Cup record to 12 titles, six of which came at the expense of rivals Zamalek.

“We’ve been working very hard since our arrival to the club and I’m very happy to win my first title with Al-Ahly,” the 62-year-old Swiss tactician added according to the club official website.

“This game is very special for us, as it is our first game to play in front of such a huge number of our fans. Therefore, I have to thank the officials in UAE for making it possible.”

Six minutes before half-time, Brazilian forward Savio earned Al-Ahly the lead by taking advantage of a terrible error by Zamalek’s Zakaria el-Wardi to curl the ball home from the edge of the box. Savio joined the Red Devils from Club Bolivar in Bolivia during the off-season.

The Reds secured the victory in the injury time when substitute Fouad completed a superb team play with a straightforward tap-in at the far post.

In his first Cairo derby, Koller gave two of his summer signings, Shady Hussein and Savio the chance to start the derby.

“We were waiting for this game to win and make our fans happy after a difficult season,” Al-Ahly goalkeeper Mohamed el-Shenawy said after the match.

“I would like to thank our fans, our coaching staff and our board of directors for their support,” El-Shenawy added.

“It is the most important goal in my career. It is a special feeling to score my first goal for Ahly in the derby against Zamalek,” Savio noted.

“I am playing for a big club with a huge fan base and a rich history. I am very happy to win my first title for the club,” Savio explained according to the club official website.

“We deserve to win the title after an amazing performance. It is always special to win the derby. Our fans deserve this feeling and we promise our fans to keep fighting for titles,” Tunisian left-back Ali Maaloul said.

“I would like to thank our fans for the fantastic support tonight. We do everything to make these amazing fans happy. It was a big game and we had the desire to fight and win the title,” midfielder Amr el-Soulia noted.

“It is a long season but tonight was a good start. We still have the league, the cup and the CAF Champions League and we will fight to win every title this season,” winger Taher Mohamed Taher said.