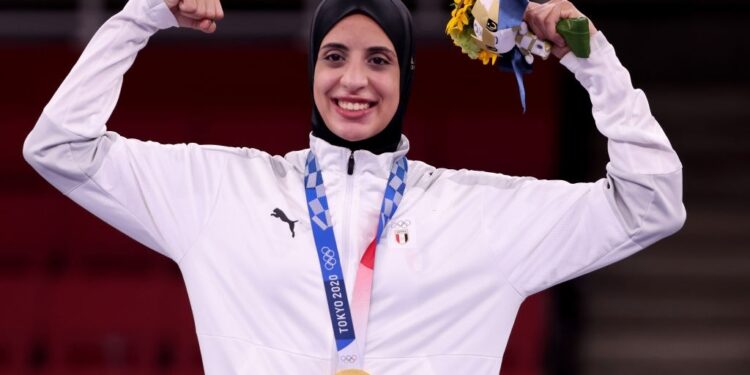 She is unique in that she was number one on the Olympic podium for Egypt.

Even at the age of 8, when she took up karate, it was clear she was destined for greatness in the sport.

She even had an Olympic gold medal as a wallpaper on her mobile. That’s motivation.

Indeed, at 22, Ferial Ashraf came first place in karate in the Tokyo 2020 Olympics and brought home a gold gong, which she regards as a huge personal achievement and a tremendous honour for her country.

“It was my first Olympics so I prepared very hard for it. After 2020, there will be no more Olympic karate,” Ashraf told the Egyptian Mail, the weekly edition of The Egypitan Gazette.

As expected, her journey to gold was arduous.

“The semi-final against Kazakhstani Sofya Berultseva was the hardest,” she said. 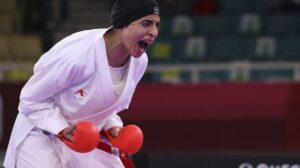 Even so, she came home for a hero’s welcome in her home district, Matariya and lauded the call by President Abdel Fatah El Sisi for robust support for Egyptians who participated in Tokyo games.

The Japanese martial art is not her only pursuit. Ashraf is studying pharmacology at university.

“Getting that study-training balance was quite a challenge, but my tutors stood by me,” she said.

Meanwhile, karate has been dropped from the 2024 Paris Olympics, so she is now preparing for the world championship in December 2021.

Feryal’s family originally belongs to the Fayoum governorate. Because migration towards the capital was the most prominent feature of the time when her parents got married, they came to live in Matryia neighbourhood, whose population now exceeds 600,000, according to the Cairo Governorate estimates in 2017.

Faryal attended Port Said Private School and beside her studies, she continued to attend her exercises.

The training was always characterised by great enthusiasm while her usually calm body turned into one full of energy and strength.

Her coach Hosni Abu Zeid said that Ashraf was “distinguished and daring”. He added that she was always training with the boys to take advantage of their strength.

Two years ago, Ashraf moved from the Marg Youth Centre to the Military Sports School in  al-Shorouk area.

Her day is now juggling between university and training, a closed camp with the national team, or travel. Ashraf managed to balance her studies with playing karate.

Egypt ranked first in the world rankings of the International Karate Federation and Ashraf was able to collect points in more than one tournament to improve her classification and later qualify for the Tokyo Olympics.

Her father said: “She did not live like other girls of her age, but she loved the game and lived with all its difficulties.”

“She is a very unique lady,” he added.