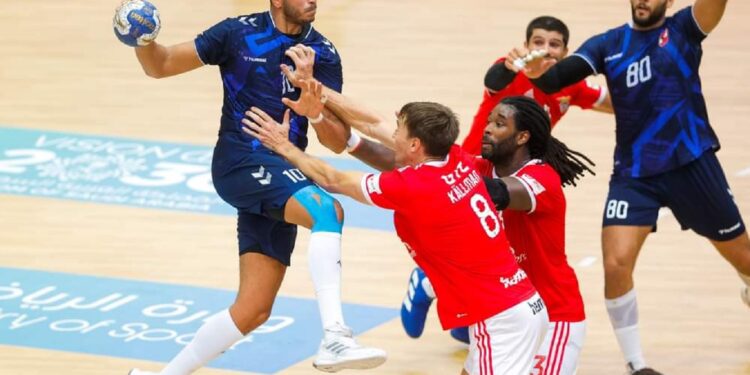 The Egyptian team recorded a 29-28 victory over the most successful Portuguese club of all time, Benfica.

The Portuguese team led 13-12 in the first half, before the Egyptian team stretched their lead in the second half. 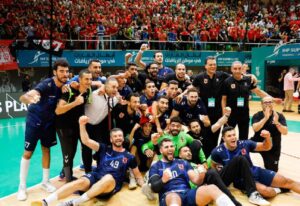 Organized by the Saudi Ministry of Sport, along with the Saudi Arabian Handball Federation, the tournament features 12 teams and continues until October 23.

This year marks the 15th, and largest, staging of the championship, which was launched in 1997.

This has been an outstanding game, with plenty of twists and turns, with a fluid situation that kept everybody glued to their seats.

Benfica led by as many as three goals in the second-half, but Al-Ahly never backed down and tried whatever was possible to cut the gap.

And they even took the lead in the 53rd minute, sending their fans into raptures. With Benfica down two men – Ole Rahmel and Alexis Borges – due to red cards, the Portuguese side really struggled.

Especially in defence, where they found it difficult to contain the full force of the Egyptian side’s attack. 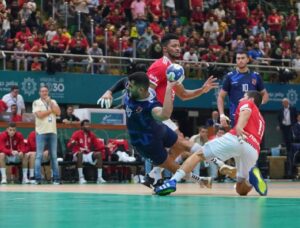 And when Jonas Kallman, the 41-year-old left wing from Benfica missed the final shot of the game.

With two seconds to go, Al-Ahly secured the 29:28 win, sending the arena into raptures. It was an amazing win, a superb performance from the Egyptian team, who really delivered a master class performance to seal their semi-finals berth, where they will be facing SC Magdeburg of Germany.

The ‘Hummel Player of the Match’ award went to Al-Ahly’s Ahmed Nasr Allah.

It has been getting harder and harder for Benfica to score, as their attack simply lacked the firepower to surprise Al-Ahly, constantly failing to score.

And the Egyptian side definitely took advantage of it, amping up their defence and constantly frustrating Benfica’s top scorers, like backs Petar Djordjic and Demis Grigoras.

On the back of this run, Ahly scored four unanswered goals in a row to turn the game on its head and prevent their Portuguese opponents from scoring for 11 minutes and 10 seconds.

Yet two goals in quick succession helped Benfica wrestle back the lead, only for a penalty from Raul Nantes to be saved by Sergey Hernandez, the second of the game for the Spanish goalkeeper.

It was a total collapse for Benfica, who showed signs of weakness in the match against Mudhar, but this is totally a different situation, where the Portuguese side need to seal at least a draw to progress to the semi-finals.

The break could not come early enough for Chema Rodriguez, whose side has totally failed in attack, turning the ball over seven times. But the main issue for Benfica was, once again, their discipline. They conceded seven suspensions, with Tadej Kljun and Alexis Borges each suspended twice.