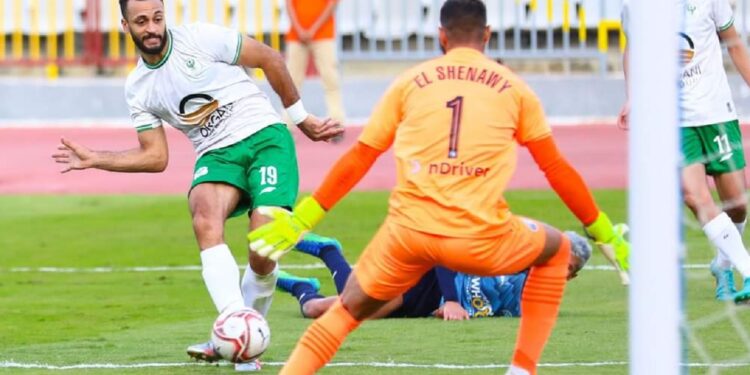 CAIRO – Cairo powerhouse Al-Ahly and Zamalek claimed victories in their matches in the 2nd matchday of the 2022-23 Egyptian Premier League season as Pyramids FC was held to a goalless draw.

The Red Devils continued their strong start to the Egyptian League season with a 1-0 win over Aswan Sunday night at Al-Ahly Stadium.

Tunisian left-back Ali Maaloul scored the winning goal in the first-half from the penalty spot to secure the three points for Al-Ahly.

Marcel Koller’s men are atop of the table with six points after two matches.

Striker Shady Hussein continued his excellent form and won the penalty after being tackled by Aswan goalkeeper and Maaloul was there to convert it to give Al-Ahly the lead after 17th minutes.

Goalkeeper Mohamed el-Shenawy was needed in the last minutes of the first-half to stop Aswan’s striker Malick Evouna’s effort to deny our former striker the chance to equalize the score.

Ahly winger Hussein el-Shahat missed a clear chance to double the score after receiving a defense-dissecting pass that put him in a perfect place to score but his shot was saved.

The second half started with a change in the midfield as Amr el-Soulia joined the game to replace Malian midfielder Aliou Dieng.

Winger Ahmed Abdelkader scored our second goal in the game but it was ruled out for offside then he was substituted as Ahly’s new-signing Brazilian forward Bruno Savio joined the game.

Bruno fired a shot in the 80th minute but Aswan’s goalkeeper was in the perfect place to save it.

Al-Ahly fans in the strands were happy to receive South African winger Percy Tau who joined the game in the last minutes after a long injury.

Al-Ahly midfielder Hamdy Fathy was named the Man of The Match.

“We have several things that we need to improve. We are still working on getting the team to be in the best shape in the upcoming matches despite of today’s victory,” Koller said in the post-match press conference.

“Aswan played a good defensive game and they were able to remain in the game till the end, as we only were leading by one goal.”

“I preferred to take off Dieng, as he felt pain in his hamstring and we didn’t want his injury to develop furthermore.”

“Finally, we focus on every match on it’s own. I’m keen to give everyone the chance to play while selecting the line-up before each match especially that we have a talented squad of players,” Koller added.

At Cairo International Stadium, Zamalek maintain their winning start to the season with an important 2-0 victory over Ceramica Cleopatra.

The White Knights’ goals came from Tunisian forward Seif Jaziri in the 10th minutes as left-back Ahmed Fatouh doubled the score in the 87th minutes.

The victory lifts Zamalek to move top of the domestic table with 6 points from 2 matches as Ceramica remained third on three points.

Zamalek will clash with Cairo rivals Al-Ahly in the Egyptian Super Cup next Friday in Abu Dhabi.

Earlier in the day, Pyramids FC and Al-Masry of Port Said had to settle for a point each at Borg el-Arab Stadium in Alexandria after a 0-0 draw.