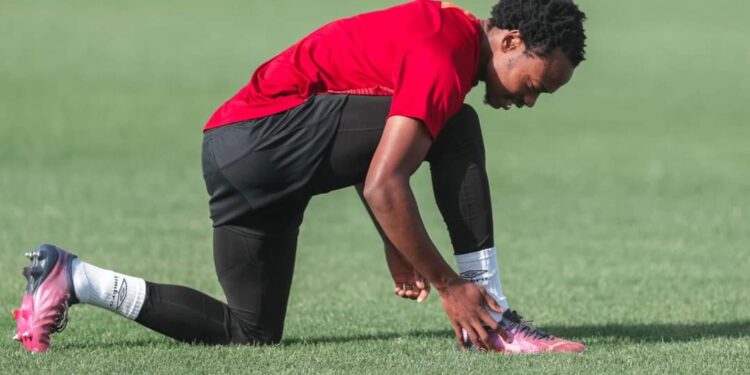 RABAT – Al-Ahly’s Percy Tau will be aiming for his own piece of history in Monday’s CAF Champions League final as he seeks to become the first South African player to win Africa’s elite club competition twice.

Ahly’s Tau has been directly involved in eight goals (three goals, five assists), more than any other player in the CAF Champions League this season, while the last player with more in a single campaign was Tresor Mputu in 2018-19 (9 – four goals, five assists for TP Mazembe).

Tau’s Al-Ahly will tackle Wydad Casablanca in the 2021-22 decider, which is to be played at Wydad’s home, the Stade Mohammed V, perhaps negating, to some extent, their tag as favourites to claim a third successive crown.

Tau joined Ahly last August, a month after they defeated Kaizer Chiefs in the 2020-21 decider, and although he has had a mixed time in Cairo so far, has contributed enormously to getting the Egyptians into the decider. He had a hand in all four goals, scoring two, as they walloped ES Setif in the first leg of their semi-final, and also netted the opening goal in the vital group stage win over al-Merreikh of Sudan.

Only Mohamed Sherif (six) has scored more goals for Ahly in this year’s competition.

Tau is hoping to add to his 2016 Champions League win with Mamelodi Sundowns, which was achieved under his current coach Pitso Mosimane, supersport reported.

Mosimane already has three wins in the competition and is hoping to join former Ahly boss Manuel Jose on four, but no South African player has achieved multiple victories.

Such has been his meteoric rise that it was only six years ago that Tau was on loan in the National First Division at Witbank Spurs, unable to break into the Sundowns lineup.

He had asked Mosimane to go to his home town club for the second half of the 2015-16 season, having started only three league games in two seasons with The Brazilians.

It turned out to be a masterstroke from the player, he rediscovered his confidence and form, and from that moment never looked back. It is very rare for PSL players to ask to be sent to a lower league, but it worked a treat for Tau.

He became a regular with Sundowns in the 2016-17 season, winning the Champions League, and within two years had joined English Premier League Brighton & Hove Albion.

Before that he appeared in the FIFA Club World Cup with Sundowns and netted a memorable goal against South Korean outfit Jeonbuk Motors. He was not the first South African to score in the competition though, that honour goes to Quinton Fortune, who netted twice for Manchester United against Australian side South Melbourne in 2000.

Work permit issues meant he could not play straight away at Brighton, but successful loan spells in Belgium with Royale Union St Gilloise, Club Brugge and Anderlecht enhanced his reputation, and Brighton brought him back to play as soon as they could in January 2021.

Appearances were scarce, though when he did play he looked the part, the competition at Premier League level being cutthroat.

That led to a reunion with Mosimane in August last year which drew some criticism as it was deemed a step backwards for the player.

But as Tau has shown in the past, he knows best when he needs a move and after a fast start, then a dip in the middle, he has shown his quality later in the season.

Tau has scored eight goals in 21 starts for the Red Devils this season, not the worst return. But at Ahly, the expectation is that every game is a win, and a forward is judged on goals alone, even though Tau has proven a master creator as well.