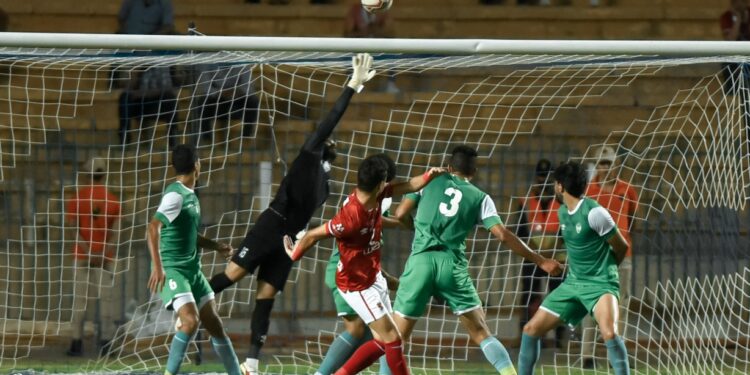 Al Ahly’s football first team was held to a goalless draw against Eastern Company SC in the Egyptian Premier League on Wednesday at Arab Contractors Stadium.

The Red Eagles created several chances throughout the game but were unable to convert them into the net.

The first fifteen minutes of the first half went by with Mohamed Mahmoud, Hossam Hassan and Karim Fouad making several dangerous attempts to give Al-Ahly the early lead; however, they were faced by a strong performance from Eastern Company’s goalkeeper and defense.

In the 30th minute of the game, Ziad Tarek received the ball from Hossam Hassan inside the opponent’s box and then dribbled past the opponent’s defender and shot the ball above the target.

A few minutes later, Ziad made another dangerous attempt on target but was unable to break the deadlock for the Eagles.

In the first ten minutes of the second half, Karim Fouad and Hossam Hassan, each had a clear-cut chance to score the opening goal of the game.

In the 64th minute of the game, Luis Miqquisone replaced Mohamed Mahmoud.

A few minutes later, Mohamed Hany and Ahmed Abdelkader entered the game instead of Mido Nabil and Ziad Tarek.

In the 80th minute of the game, Mohamed Saleh, Eastern Company SC’s defender, was sent off after committing a foul on Hossam Hassan from outside the box.

The final minutes of the game went by with no change in the result, as the Eagles failed to score the winning goal.