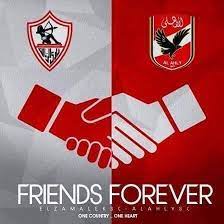 EGYPT giants Al-Ahly and Zamalek finished preparation in readiness for their clash in the 21st week of in the 2020-21 Egyptian Premier League season at the Cairo International Stadium Monday at 9:30pm Cairo Local Times.

Zamalek leads the league table with 44 points from 20 games as the team won 13 matches; drew in 5 and lost 2 matches.

Al-Ahly is in second place with 40 points from 18 matches as the team won 12 matches, held in 4 and lost 2 matches. Ahly has two postponed matches until the team equals Zamalek in number of matches.

The White Knights Coach Patrice Carteron hopes to avenge his last loss two weeks ago. Zamalek lost 1-2 to AlAhly in the postponed match from the 4th week of the 2020-21 Egyptian Premier League season.

The Red Devils head coach, Pitso Mosimane seeks to snatch the three points to get close to the top of the standing.

The two teams claimed victories in their matches in the 20th week of the Egyptian Premier League season.

At Alexandria Stadium, Ahly defeated Al-Ittihad of Alexandria 2-1 thanks to goals from Moroccan defender Badr Benoun in the 49th minute and playmaker Mohamed Magdi Afsha in the
56th minute.

At Cairo International Stadium, Zamalek earned a 2-1 victory over Smouha.

The White Knights goals came from Moroccan striker Achraf Bencharki in the 17th minute and midfielder Tarek Hamed in the 42nd minute.

Zamalek’s coach hopes to take advantage of the many absences that arch-rival suffers as his side will enter the game against Ahly with a full squad without injuries or suspensions.

Mosimane will intend to depend on Moroccan Badr Benoun in the defence, Hussein el-Shahat instead of Ajayi and Ayman Ashraf or Mahmoud Wahed in the left front instead of Maaloul.

On the other hand, Zamalek’s coach Carteron will rely on his North African imports of Tunisian Ferjani Sassi and Moroccan winger Achraf Bencharki with the exploits of Ahmed Sayed Zizo and Mahmoud Youssef “Obama”.