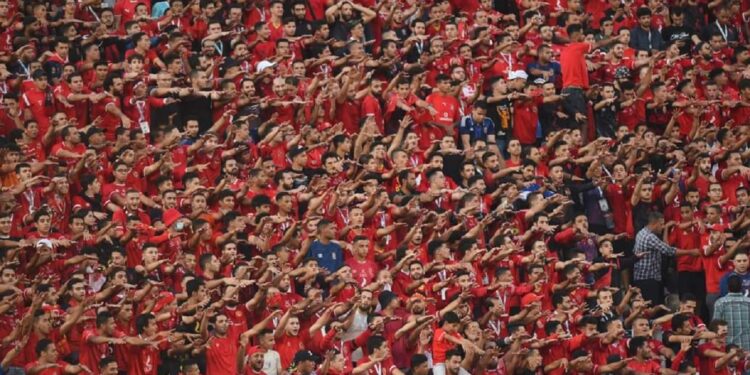 Al-Ahly fans cheer during their side’s match against Tunisia's US Monastir at the CAF Champions League second preliminary round.

The Egyptian giants, who entered the second leg with a 1-0 advantage, confirmed their place in the group stage after defeating the Tunisian team 3-0 Saturday night at home.

Ahmed Abdelkader opened the score after 15 minutes with a great effort as he set himself inside the box and powered the ball past the goalkeeper.

Midfielder Hamdy Fathy has an excellent aerial ability and was a massive chance for him to show that skill.

Three minutes before half-time, Hamdy leapt higher than anyone else in the box to find the back of the net with a fantastic header.

In the second-half, Hamdy added another goal to secure our victory.

Winger Taher Mohamed Taher sent a brilliant cross and Hamdy met it with a flick header that found the back of the net to make the score 3-0.

Thanks to big victory, the Red Devils booked their place in the group stage for the 20th occasion in the club’s history.

The second leg of the last 32 tie in Lubumbashi finished 0-0 – as did the first encounter in Kampala last weekend – and the visitors won 4-2 on penalties.

Vipers will participate in the group phase of the premier African football competition for the first time from February while Mazembe are relegated to the second-tier CAF Confederation Cup.

A Mazembe official told AFP that Dumas, 54, had been “dismissed” after the five-time African champions failed to reach the lucrative mini-league stage for the second straight season.

After a playing career as a defender in France and England, Dumas coached in his homeland, Morocco, Equatorial Guinea and Algeria before joining Mazembe last year.

Losing to Vipers is a huge financial blow to a club that last won the competition in 2015 and was the first African team to qualify for the Club World Cup final, 12 years ago.

Reaching the Champions League group phase would have guaranteed Mazembe at least $550 000.

Now they must win a two-leg playoff in November against a Confederation Cup last 32 winner to reach the mini-league stage of that competition, where the prize money is considerably less.

Meanwhile, a disputed penalty gave four-time champions Esperance of Tunisia a 1-0 win over Plateau United of Nigeria and overall success on away goals after a 2-1 first leg loss.

Mohamed Ali Ben Romdhane fired the spot kick past goalkeeper Suraj Aiyeleso after Plateau protested that the foul which led to the spot-kick occurred outside the box.

Al-Merrikh of Sudan survived a brave fightback by Al-Ahly Tripoli of Libya to progress on away goals after a 3-3 aggregate stalemate.

The Sudanese won the first-leg 2-0 and stretched their overall lead to three goals when Ramadan Agab netted midway through the first half in Benghazi.

But the Libyans recovered to score twice before half-time and again with nine minutes left to lead 3-1 before missing a penalty that would have put them ahead on aggregate.