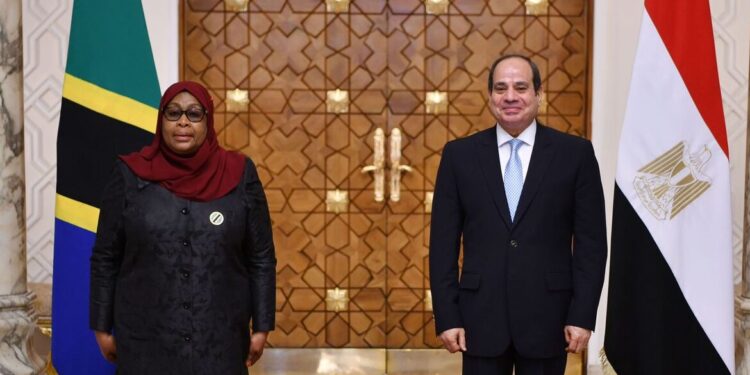 Egypt’s President Abdel Fattah El Sisi reiterated full support for the implementation of Tanzania’s Julius Nyerere dam project, which could offer a unique model and symbol of co-operation and friendship between Egypt and Tanzania, and other African countries.

Addressing a press conference after talks with President of the United Republic of Tanzania, Samia Hassan, in Cairo on Wednesday, President Sisi stressed the importance of the project to realise the hopes and aspirations of the Tanzanian people for a better life.

President Sisi had received the Tanzanian president at the Al-Ittihadiya Palace in Cairo, where Hassan was given a red-carpet welcome. The two leaders inspected the Guard of Honour, and the national anthems were played, Spokesman Radi added. 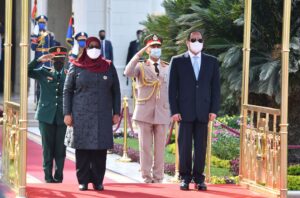 President Sisi stressed Egypt’s keenness to support Tanzania’s development needs, particularly in infrastructure, electricity, and health, through maximising investments by the specialised Egyptian companies in light of their vast expertise in these fields.

At the onset, President Sisi welcomed the Tanzanian President in her first official visit to Egypt, and expressed appreciation for the close and historical ties, and co-operation binding the two countries.

President Sisi reiterated the importance of further cementing bilateral relations and consolidating strategic co-operation with Tanzania in all fields, particularly at the economic, trade and security levels, as well as making the necessary arrangements for convening the bilateral joint committee. 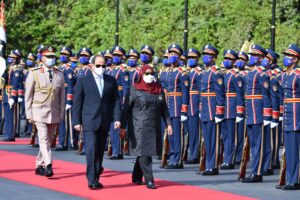 For her part, the Tanzanian President highly appreciated the extensive and distinguished historical ties with Egypt, and voiced keenness on further promoting relations in all fields, economic and trade in particular, Spokesman Radi said.

Hassan said that her country is interested in maximising the technical support Egypt offers to the Tanzanian human resources in capacity building, besides seeking support from the Egyptian companies operating in infrastructure. She referred in this respect to an ambitious development her country seeks to carry out, with the Julius Nyerere dam project on top.

The project offers a model that reflects the deep and unique ties and friendship with Egypt, she said. 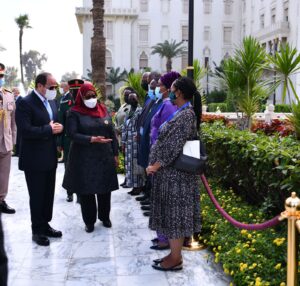 She also praised Egypt’s pivotal role inmaintaining security and peace at the regional level, and appreciated Egypt’s stances that aim to achieve stability in the Great Lakes Region, the Nile Basin and East Africa.

According to Spokesman Radi, the Egyptian-Tanzanian talks also dwelt on co-operation in fisheries, animal production, and agriculture, as well as bilateral coordination in combating terrorism and extremist ideology, considering Egypt’s long expertise in disseminating moderate Islam and combating religious intolerance and hatred, and backing the preservation of values of coexistence and tolerance.

In addition, the talks addressed the latest developments of Grand Ethiopian Renaissance Dam(GERD) and the two sides agreed to intensify coordination over the coming period, Radi said.

President Sisi stressed that importance of water issue for the Egyptian people being one of national security. He underlined in this respect, Egypt’s adherence to its water rights through concluding a fair and legally binding agreement on GERD filling and operating in line with the rules of the international law and the latest relevant resolution by the UN Security Council, to maintain security and stability in the entire region, Spokesman Radi said.

By the end of the talks, the two presidents witnessed the signing of several MoUs for co-operation in fields of education, higher education, and youth and sports.