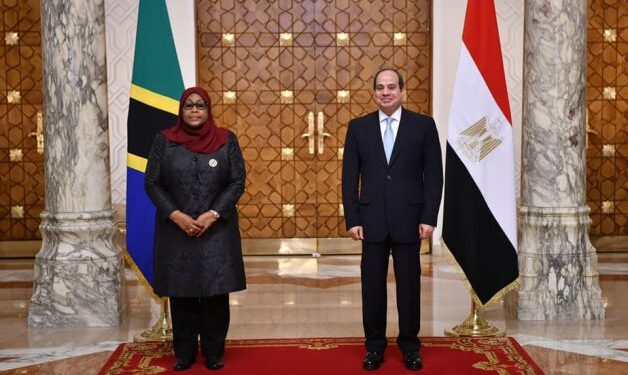 CAIRO/DAR ES SALAAM – Tanzanian President Samia Suluhu Hassan laid on Monday the foundation stone of the Egyptian Industrial City (EIC) in Kigamboni region during her participation in a ceremony organised on the occasion of opening an industrial complex by Elsewedy Electric company, the cabinet’s media centre said.

An Egyptian delegation, that began its Tanzania visit on Sunday, took part in the ceremony that was also attended by Housing Minister Essam el-Gazar, head of the General Authority of Free Zones and Investment Mohamed Abdel Wahab, Egyptian Ambassador to Tanzania Mohamed Gaber Abul Wafa, Executive President and Managing Director of Elsewedy Electric Ahmed Elsewedy, representatives of Elsewedy-Arab Contractors consortium in addition to investors and businessmen.

She promised to overcome any hurdle blocking their investments and to facilitate all measures related to issuing licenses.

She said that the opening of the first stage of Elsewedy complex will pave the way for more Egyptian investments, especially after laying the foundation stone of the Egyptian Industrial City.

She assured Egyptian businessmen that their investments in the African country will be safe.

Gazar said President Sisi directed following up all cooperation projects that were agreed upon during talks with the Tanzanian president, including Julius Nyerere Hydroelectric dam.

He added that a monthly report is being sent to Sisi on the progress of these projects.

Elsewedy Industrial Complex is established with more than $35 million in investments. It provides more than 50,000 jobs to talented engineers and technicians in the first stage.

The complex also has a logistics center built over a 4,800-sqm space.

Moreover, the complex will produce the necessary solutions and equipment for the 2025 manufacturing strategy in Tanzania.

Elsewedy Electric is a leading integrated energy solutions provider in Africa and the Middle East. It has a portfolio incorporating all traditional and renewable energy areas along with related services.