Voicing the ministry’s cherishment of and confidence in Egypt’s champions, including people of determination, Sobhi hailed the role of the players’ families who contributed to their children’s sports achievements.

Meanwhile, officials of the Egyptian Paralympic Committee and heads of the federations concerned have extended their thanks to the sports minister for his constant support for all champions.

In addition, Egypt’s Malak Hassan won the 4th place in the 100m breaststroke event; while her compatriot Ziad Hisham Amin came eighth in the same event. 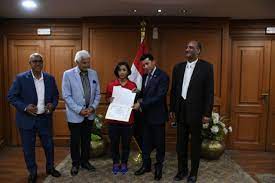 As for the World Blind Judo Championship, hosted by Kazakhstan on May 25-30, Egypt’s Marwa Ahmed Hussein won the 5th place; while her compatriot Salah Mohamed Salah ranked seventh.

In addition, Hend Hazem Taha won the 1st place in African Boccia Championship in Johannesburg held on May 16-23 in Johannesburg, South Africa, and so did her compatriot Abdel Rahman Ahmed Saad; while their compatriot Islam Amr came third at the competition.

Moreover, Egypt’s Salma Ali Abdel Moneim won the 3rd place at the 2022 World Para Taekwondo Grand-Prix to be held in Sofia, Bulgaria, on June 4-7; while her compatriot Ahmed Mohamed Naguib came eighth at the Para-canoe World Championship hosted by Poland on May 5-30