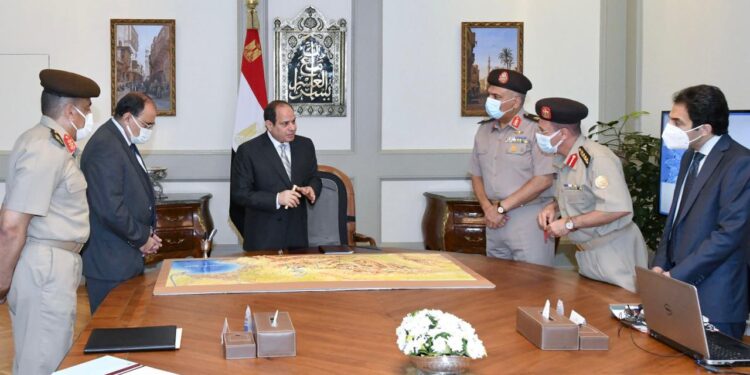 President Abdel Fattah El Sisi stressed the importance of abiding by the specific timetables for implementing construction projects with the highest standards and in accordance with the principle of financial cost governance and reliance on locally-manufactured high-quality products and components.

During the meeting with Presidential Advisor for Urban Planning Amir Sayed Ahmed, Head of the Armed Forces Engineering Authority Major General Ihab el-Far as well as a host of top government officials, the president followed up on the progress of a number of projects being implemented nationwide by the Armed Forces Engineering Authority, especially the Galala City, the New Administrative Capital (NAC) and its residential neighbourhoods and facilities, Presidency Spokesman Ambassador Bassam Radi said.

The president checked the engineering designs of the NAC’s People’s Square, the various international schools, and the city of horse stables as well as the Egypt International Olympic City and the new headquarters of the Stock Exchange, Ambassador Radi added.

The president also reviewed the International Motor City, its yards, exhibitions and facilities. He directed that the city be fully integrated and should include all related facilities such as shops, administrative buildings, banks and notary public offices.

The president also followed up on a plan to establish a “Gold City”, which will be an integrated city for gold industry and trade in Egypt. He called for providing the city with gold industry and production requirements, high-end exhibitions. He also directed that workers be trained to hone their skills in such a way that would reflect Egypt’s ancient history in this delicate handicrafts industry.

With regard to the axes and road projects, President Sisi called for expanding the al-Dabaa axis to have 8 lanes in each direction, along its 260km length, including the service roads and providing it with all facilities to citizens.

The president also directed the officials to expand the main entrance to the Cairo-Suez Desert Road under the “Moshir Abou Ghazala” bridge to avoid the recently observed traffic congestion in this area.