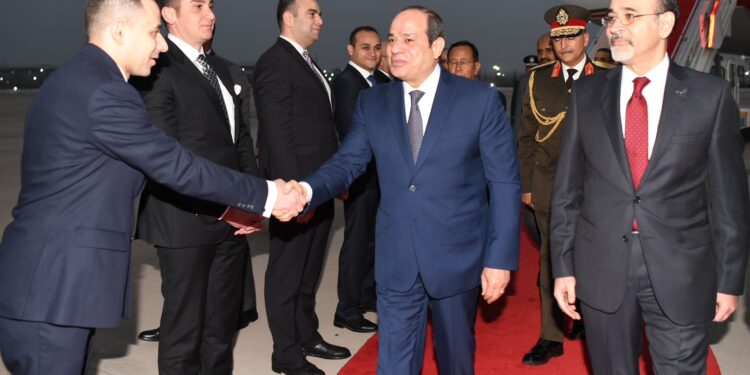 Egyptian President Abdel Fattah El Sisi arrived in New Delhi on Tuesday on a visit to India at an invitation from Indian Prime Minister Narendra Modi, to participate as in celebrations marking India’s Republic Day on January 26.

India’s Republic Day marks the date on which the Constitution of India came into effect on January 26, 1950.

In statements on Tuesday, Presidential Spokesman Bassam Radi said the president’s participation in the event reflects the close ties between the two countries and India’s deep appreciation of the Egyptian leadership and government, adding the president will be the main guest of honour in the celebration.

It also demonstrates the deep interest of the Indian side in strengthening co-operation between the two friendly countries in their capacity as one of the most important emerging countries and in light of their vital role on the regional and international arenas, the spokesman said.

President Sisi’s visit to New Delhi coincides with the 75th anniversary of establishing diplomatic ties between Egypt and India, the spokesman added.

During his visit, President Sisi is scheduled to meet with a number of officials in India, headed by Prime minister Modi, President Droupadi Murmu and other officials in order to discuss ways to strengthen bilateral relations at all levels, the spokesman said.

The visit will include President Sisi’s meeting with heads and representatives of a number of major companies in various domains to discuss mechanisms for consolidating economic ties between the two sides and investment opportunities in Egypt, he added.