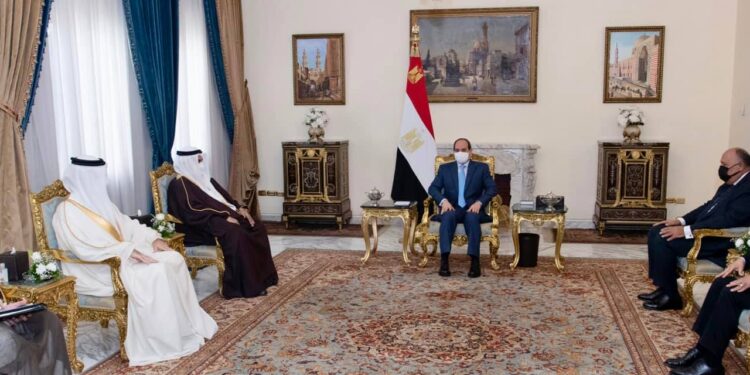 The meeting, attended by Foreign Minister Sameh Shoukry, and Bahrain’s Ambassador in Cairo Hisham Al-Jowder, tackled means of boosting bilateral ties at various levels, particularly the arrangements for the meeting of the joint committee due to be held in Cairo during the first quarter of 2022, Presidency Spokesman Ambassador Bassam Radi said.

The meeting also reviewed the latest developments at the regional level as well as issues of common concern, and it was agreed to strengthen bilateral coordination over the coming period to counter the challenges facing the Arab nation, Radi added.

President Sisi conveyed his greetings to King Hamad bin Isa, referring to the special relations between Egypt and Bahrain. He said that the two countries share identical views on all issues, Spokesman Radi said.

For his part, Sheikh Khalid bin Ahmed said he was honoured to meet President Sisi, and conveyed to him greetings of King Hamad bin Isa, and the monarch’s keenness on boosting the close relations between the two countries, in a way that would consolidate security and stability in the region.

He also expressed appreciation for President Sisi’s efforts to promote joint Arab action and preserve peace and security at the regional level.