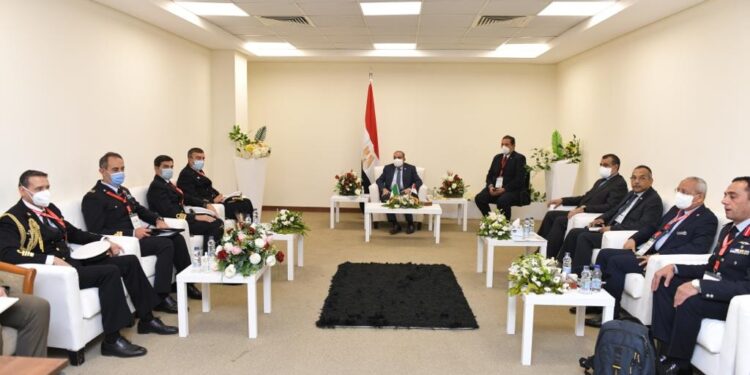 CAIRO – Egypt’s Minister of State for Military Production Mohamed Ahmed Morsi conferred with Dario Giacomin, the Italian Assistant Minister of Defense for Armaments Affairs, and his accompanying delegation on the proposed cooperation topics of mutual interest.

This came at the Ministry of Military Production’s pavilion within the activities of the 4th and final day of the Egypt Defense and Military Industries Exhibition “EDEX 2021”, held from November 29 to December 2, 2021 under the auspices of President Abdel Fattah El Sisi.

The minister reviewed the most prominent technological, manufacturing and technical capabilities of the companies and units affiliated with his Ministry and the proposed topics of cooperation of mutual interest.

He invited the Italian side to exchange visits and expertise with the factories and companies of the Ministry of Military Production and work on continuing coordination between the two sides to find scientific and technological solutions for equipment and defense systems.

The minister said, according to MENA, that the meeting was held within the framework of strengthening cooperation with the Italian side, given the historical relations between the two countries and the ministry’s keenness to exchange expertise and learn about the latest development in armament systems by world military powers.

He invited Italian companies to participate in the next edition of the exhibition “EDEX 2023”.

The Italian official said his country is interested in strengthening partnership with Egyptian companies operating in the defense and military industries.

He praised the organization of the “EDEX 2021” exhibition and the Egyptian pavilion exhibits, led by those of the Ministry of Military Production, praising its products and the extent to which they are in line with the latest armament systems.

Official spokesman for the ministry Muhammad Eid Bakr said the minister emphasized during the meeting keenness to deepen local industrialization and strengthen technology in the field of defense industries and systems in the production lines of affiliated factories, in accordance with the latest systems of the Fourth Industrial Revolution.

He expressed the ministry’s keenness to establish partnerships with major international companies in the field of advanced defense systems.