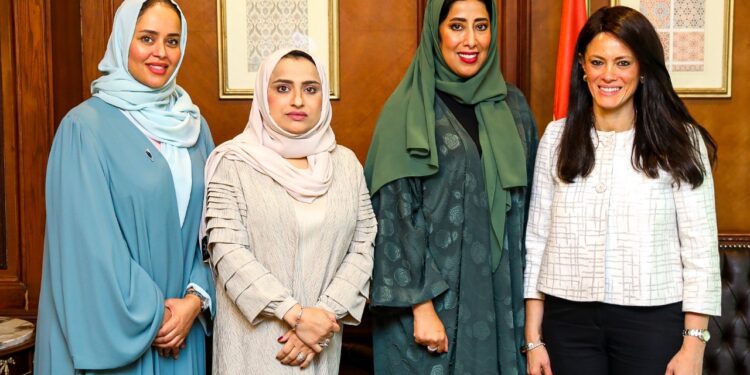 Minister Mashat in a photo with the Director General of Dubai Media Office Mona Al-Marri, the CEO of Dubai Women Establishment and Secretary General of UAE Gender Balance Council, Shamsa Saleh, and the Director of Dubai Press Club, Maitha Buhumaid.

Egypt’s Minister of International Co-operation Rania el-Mashat on Monday met with the Director General of Dubai Media Office and Vice President of the Gender Balance Council, Mrs. Mona Al-Marri, in the presence of the CEO of Dubai Women Establishment and Secretary General of UAE Gender Balance Council, Shamsa Saleh, and the Director of Dubai Press Club at Dubai Media Office, Maitha Buhumaid.

During the meeting, they discussed a number of projects implemented by Egypt in terms of gender equality, and various co-operation files between both countries, under the leadership of President Abdel Fattah El Sisi and UAE President Sheikh Mohamed bin Zayed bin Sultan Al Nahyan.

El-Mashat stressed the continuation of joint co-operation to implement the directives of political leadership in both countries, thus maximising benefits and achieving common interests.

The minister applauded the development relations between Egypt and the UAE, and emphasised her ministry’s keenness to increasing co-operation with development institutions for economic growth.

While Covid-19 was a challenge, it did not hinder development efforts in Egypt, including progress on SDG 5: Gender Equality, the minister added.

Egypt was the first country to provide a women-specific response during Covid-19 launched by the National Council for Women, el-Mashaat said, adding that Egypt was in first place in the Middle East and West Asia regions with 21 policy measures according to the UNDP Covid-19 Global Gender Response Tracker.

El-Mashat also referred to the Closing the Gender Gap Accelerator launched by the Ministry of International Co-operation, World Economic Forum (WEF), National Council for Women (NCW) and the private sector.

This is the first of its kind public-private collaboration model in Africa and the Middle East to help governments and businesses take decisive action to close economic gender gaps, she said.

It also aims to include 100 private sector companies to enhance efforts and policies in terms of empowering women and increasing their participation in the labour market, the minister said.

During the meeting, el-Mashat discussed Egypt’s COP27 presidency, and possible opportunities to establish international partnerships, pushing for the country’s green transformation and reviewing efforts to date in renewable energy, water, SMEs and digitisation.

The minister reviewed Egypt’s efforts to transform itself into a regional energy centre, as well as the East Mediterranean Gas Forum (EMGF), efforts to digitise education, expand social protection programmes, and water and sanitation projects.

For her part, Mrs. Mona Al-Marri said there are many future co-operation opportunities in light of the common vision shared by both countries.

The director general of Dubai Media Office added that there are broad prospects for cooperation with Egypt on the gender file.

Co-operation on potential opportunities will enhance the strategic partnership, exchange knowledge and experiences, and advance the SDGs.

Earlier this month, el-Mashat witnessed the launch of the Women’s Economic and Social Empowerment Programme in partnership with USAID with a grant of $39 million. This programme will be implemented from 2022 to 2027 in the governorates of Assiut, el-Beheira, Minya, Giza, Sohag, and Qena.