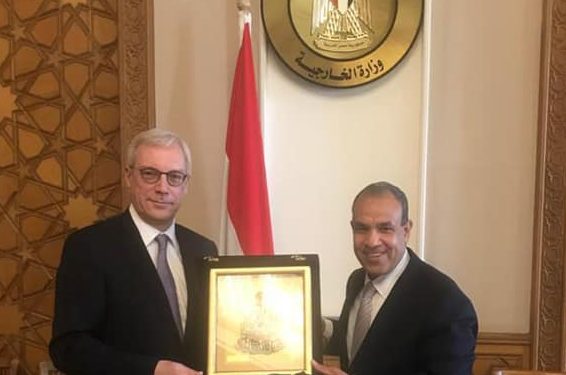 Ambassador Abdel-Aati highlighted the strong historical relations between the two friendly countries and mentioned the steps that were recently taken towards the implementation of major projects in the field of bilateral co-operation, including the establishment of the Russian industrial zone in the Suez Canal.

On the other hand, ambassador Abdel-Aati discussed the most prominent elements of Egyptian relations with Europe at the level of states and institutions, pointing out to the importance of these ties to enhance co-operation with Eastern and Central European countries.

For his part, the Russian deputy foreign minister praised the strength of ties between the two countries and provided a brief explanation of the nature of his country’s current priorities with regard to its geographical neighborhood and the entirety of the European continent.

The Russian official was also interested in learning about Cairo’s vision regarding Eastern Mediterranean issues, including the East Med Gas Forum as one of the shining models of the cherished regional co-operation.

Ambassador Abdel-Aati said that the founding charter of the forum was put into effect after its ratification by most of the member states, referring to the efforts made by Egypt to strengthen co-operation in the Eastern Mediterranean region, especially in the field of energy.

The two sides also discussed a number of European files of common interest. They exchanged views on the main issues in the Western Balkans region.