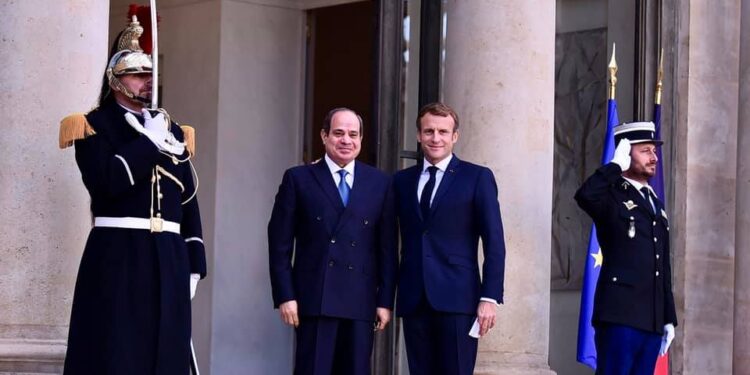 The French president praised progress in relations between Egypt and France in all fields. This progress, he said, was manifest in a rise in the number of official visits by senior officials from the two countries.

President Macron noted that his country looks forward to enhancing co-operation with Egypt in the coming period, boosting political coordination and exchanging views on different issues of mutual interest.

The French president described Egypt as one of France’s most important partners in the Middle East. Egypt, he said, is a cornerstone of stability and security in the region. 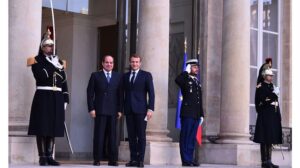 President Macron said his country is also keen on backing the ambitious measures taken by Egypt to push its economy forward and achieve comprehensive development, especially by increasing French investments
in and the transfer of French expertise and industrial technologies to Egypt.

He referred to praise by international economic institutions of the performance of the Egyptian economy.

He added that the president said Egypt is keen on maintaining consultations with France on a regular basis on bilateral and regional issues.

President Sisi also referred to what he described as the ‘fruitful’ results of French and Egyptian presidential visits and the latest visit by Egyptian Prime Minister Moustafa Madbouli to France in October this year and his meeting with senior French officials.

The president also referred to visits to Egypt by the heads of major French companies, who discussed their companies’ activities in Egypt.

“The Egyptian government is determined to make the conditions appropriate for French companies to increase their investments in Egypt,” President Sisi said.

He added that Egypt would remove any hindrances that can face French businesses in the coming period. 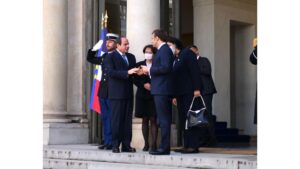 He added that the two presidents praised military relations between their two countries, describing them as an important feature of Egyptian-French relations, especially after the completion of a series of arms purchase deals.
President Sisi said Egypt looks forward to maintaining these relations in the future. 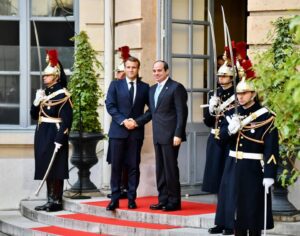 Talks between the two leaders also focused on means of settling the Libyan crisis in the light of the international conference being held in Paris on Libya.

The two leaders agreed to work jointly to bring about a settlement to the situation in Libya in a comprehensive and integrated manner on the road to holding elections in the country in December this year.

President Sisi and President Macron also agreed on the need for the exit of foreign troops and mercenaries from Libya to help security and stability return to the country and protect its resources and national institutions away from foreign interference, Ambassador Radi said.