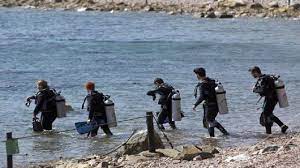 Divers found a dead mermaid on Tuesday in Abusuma Bay north of Safaga on the Red Sea.

Divers found a dead mermaid on Tuesday in Abusuma Bay north of Safaga on the Red Sea.

The sea cow, which is also known as the mermaid, is an endangered species and an attraction for tourists and divers.

The divers told reporters: “During our return from a diving trip, we were surprised to find a three-metre mermaid floating dead on the surface of water.”

“The creature must have collided with a speedboat a week ago and the waves pushed it up on the shore,” the divers added.

The Operations Room of the Red Sea Governorate had earlier received a notification from Hurghada Environmental Protection and Conservation Association (HEPCA), stating that a three-metre-long mermaid had been found dead south of Marsa Alam.

A preliminary examination of the dead animal suggested that the cause of death was “a boat collision, causing deep wounds to the head and body”.

Mahmoud Hanafi, who is professor in marine sciences and environmental advisor to HEPCA, said: “The association has called on the authorities concerned to take strict measures to protect dolphins and endangered marine creatures from extinction.”